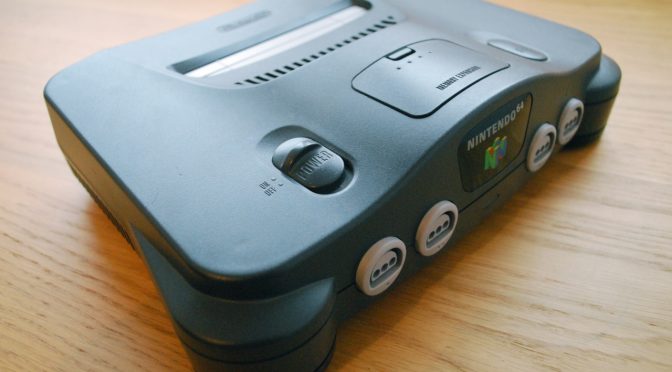 The Nintendo 64 console was the last major console to feature cartridges, and following on from the hugely successful Super Nintendo Entertainment System (SNES), it had a tough act to follow. It aped exactly the format of the SNES, with the cartridge slot at the rear of the top side of the console, and 2 large buttons for power and game reset.  With it’s large “power bulge” towards the front of the console, the Nintendo 64 console somehow suggests the case could scarcely contain the graphical muscle within.  It featured some “feet” at the front of the console, giving off a sense of weight and substance, another reference to the increased power of the Nintendo machine.

Unlike its major competitor of the time, the Sony Playstation 1, it was also a friendly looking console, smoothed and without a straight line to be seen, and large colourful graphic on the front breaking up the otherwise monotone colour scheme.  This fit with Nintendo’s targeted audience, and was the choice for younger gamers everywhere, as opposed to the Playstation with its subdued design which was clearly aimed at a more mature demographic.

When researching this article I couldn’t find the right image to represent the console, so I took some pictures myself with my Nikon D60 digital SLR, and I hope you like the image I created. I wanted to capture the smooth curves and friendly face of the Nintendo 64 console which in this photo looks organic, almost frog-like.