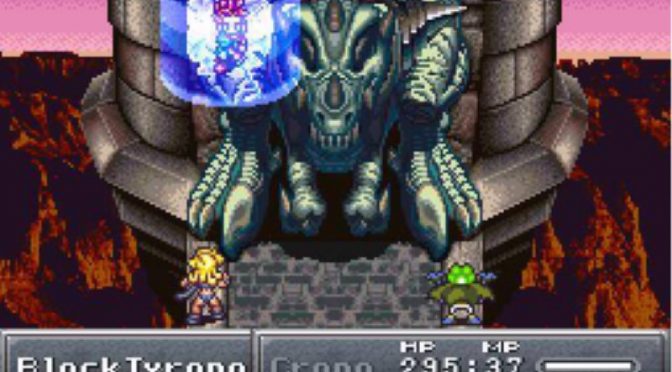 Many retro games fans the world over will claim Chrono Trigger as their favourite RPG – and this a game that was never officially released outside of Japan and the US.  At least not until the 2008 re-release on the Nintendo DS.  Amazingly, this was the first time many UK gamers will have played this classic RPG.

The game was originally released in 1995, but I was introduced to the Super Nintendo Entertainment System (SNES) much later on as I started to collect classic retro consoles and titles.  I was always a Megadrive fan, but through researching some US retro game sites and podcasts I was convinced to invest in a SNES on ebay, and pick up some classic games.  I tried a number of RPG’s, inlcuding Legend of Zelda and the Final Fantasy series, before seeking out Chrono Trigger (and the converter required to use on a UK console) due to the positive feedback from the fan base.  The was that this was an even better RPG than the Nintendo classic.

I can’t really do the Chrono Trigger storyline justice in a short review as I could go on for hours about this incredible RPG, but here is a brief sysnopsis.  The main character, Chrono, stumbles across a machine that takes him back in time, and discovers an evil force, LAVOS, that will eventually destroy the earth. With his friends Marle, Lucca and Frog, he must use the time machine to travel back and forth through the ages and defeat LAVOS.

The game had a fantastically well thought out storyline, where speaking to characters in the game revealed clues as to the next steps.  Due to the time travelling aspect, the same locations would change based on your past actions, impacting the current timeline.  To complete the game you had to travel back and trigger specific events that would foil LAVOS’ plans at a later point.  The game featured multiple endings, depending on actions taken during the game, which caused the game to branch in different directions, meaning that you could play the game several times over and never see all of the endings.  This branching system also extended to smaller decisions, such as whether to steal some food or not, which would have implications later in the game.

Chrono Trigger had a unique battle system, where enemies would be confronted on the playfield rather than in a separate battle screen, and allowed members of your party to either select a solo attack, or combine forces for a special move.  Party members could also be assigned default attack patterns, be aggressive, tactical or to always heal.  This was a big departure from the RPG conven

tion of random battles whilst traversing the game world.  Mastering the battle system, particularly the combination moves was critical to defeating some of the bigger bosses, particularly the various forms of LAVOS.   Remember this game was released back in 1995 where games were still hard to complete – you had to level up your characters to get past certain enemies, resulting in lots of trial and error before progress could be made.  This definitely introduced a sense of achievement to the game experience which is missing in many games on modern consoles.

A sequel, Chrono Cross would follow on the Sony Playstation in 1999, which was well received but sold in smaller volumes. Finally in 2008 the game was released in Europe on the Nintendo DS, so UK gamers like me could finally (officially) get their hands on this fantastic RPG.

Chrono Trigger has to be one of my favourite RPG’s of all time, up there with Legend of Zelda : Links Awakening, and Dragon Quest VIII. If you have not had a chance to play it, try the DS version which is going to be cheaper than an original SNES cartridge, I promise you wont regret it.

One thought on “Chrono Trigger – Classic RPG for Super Nintendo”