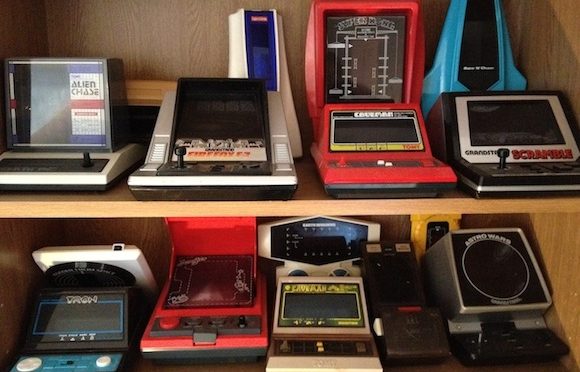 One of my earliest video gaming experiences was at the end of term in my primary school, where we all got to bring in a toy and lessons were given over to general playtime. Amongst all of the classic board games like Mouse Trap and Kerplunk, I spotted a small tabletop machine that had a crowd of excited boys around it. A loud bleeping noise could be heard above the chatter – it was my introduction to the world of handheld games.

The game was Astro Wars, and I can’t remember wanting to play with anything as much before or since. Except maybe the first time I saw a sit down Star Wars cabinet.

I didn’t really have the cash back then to buy these handheld games, which even at the end of 1980 retailed at around £30 – with inflation around £120 in today’s money – for a dedicated console that only had one game on it. I did get a more basic handheld, a Space Invader clone called Galaxy Invader, which I played to death, but I really wanted that Astro Wars game.

Time passed and the handheld games made way for cartridge based consoles that plugged into the TV, and my interests moved onto home computers like the BBC Micro and the ZX Spectrum.

Many years later in 2004 and my 34 year old self came across an Astro Wars game on ebay, and I was instantly back in that primary school, lusting after this amazing game. I had kept up my video game habit over the years, always having at least one current generation console, but had never thought that I could go back and buy the old handheld games I could never afford as a kid. But there it was, a mint Astro Wars for a tenner. A quick bid and it was mine.

Now for anyone who has been bitten by the ebay bug, you will know how easy it is to get drawn into a bidding frenzy, and this was how my handheld collection started. I wanted some more of the Grandstand games, so I bid on titles like Scramble and Munchman, as well as the Game & Watch titles that I had lusted after as a child such as Donkey Kong. From there I diversified into tabletop games by Tomy and Hales, as well as some of the US titles by Coleco with their great multi-coloured cases.

These games would arrive at my house, and every day after work was like Christmas as I opened up the next parcel, and another memory from 30 years ago would hit me – when I first saw the game, who owned it, what was playing on the radio. It was such a buzz, my wife and kids could not understand my excitement at playing with these old handheld games.

At a certain stage I had to take stock, I had so many games building up I was starting to get doubles, and with nowhere formal to display them in my house, my spare room started to resemble that of a compulsive hoarder, with boxes piled from floor to ceiling. By this point I had examples from all of the major manufacturers of the time, not complete sets but all of the most popular examples, and never having paid more than 10 to 15 quid a unit. I had been buying regularly for around 2 years, but due to work pressures and a growing family, I put my collection on hold.

A few years passed by, 3 kids later and having finally got around to renovating my house, the only room left was the spare room, so I had to face my handheld game collection, also know as “dad’s massive pile of old tat”. The spare room needed to be converted into my son’s room, but I negotiated a wall that would house my collection. A wonderful weekend was spent going through the boxes, selecting the best examples for display, and generally discovering my handheld games collection all over again.

When I could finally see all the games together I realised I had built a fairly comprehensive collection of 80’s handhelds, when all I had really set out to do was acquire some of the games I had missed out on as a child.

What next for my Handheld Games collection?

Now I have finally admitted that I am a collector, I have an OCD like urge to fill the gaps, although I am now looking at some of the rarer and therefore more expensive items. There are a couple of units that I would really like to add, such as the arcade cabinet shaped games from Coleco, and a rare Thomas the Tank Engine game from Grandstand, which are going to set me back a few quid. I have also avoided the temptation of building a full Game & Watch collection, as at over 60 games, and a huge amount of competition, this could cost a small fortune.

For now I am just enjoying having the games on display where I can easily get to them and play them, and with my eldest son at the same age as when I first discovered them, he is starting to understand my handheld games obsession.

If anyone has any interesting old games looking for a new home, please contact me at alex@retrogamesnow.co.uk