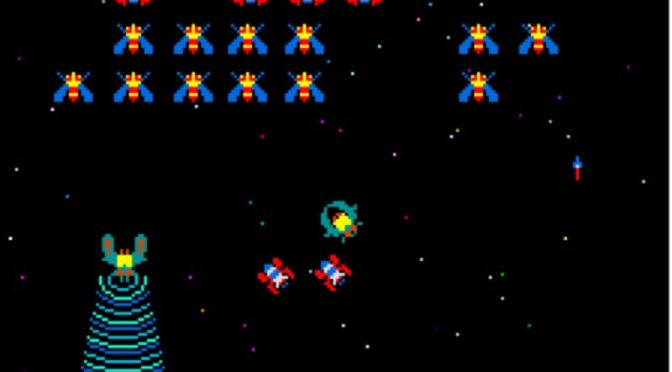 At the time of writing, summer is here, and I am reminded of hot days spent in the arcades playing games like space shooter Galaga.  In the early 80’s my holidays would be spent camping with my family, and many of the campsites we visited would have a clubhouse and games room, and my pocket money would be spent indulging my habit on whatever cabinets were available.

In 1981 Galaga was the game of the summer for me, released by Namco as a successor to one of my previous favourites, Galaxians.  Having played the excellent space shooter Galaxians to excess I was keen to master it’s sequel – Galaxians’ diving aliens were a revelation to me after playing the more pedestrian Space Invaders, and I was sure that Galaga would be even better.

The first thing you notice on firing up Galaga is the graphics – big, colourful and incredibly fast, faster than anything that had come before it.  Rather than being presented with all of your enemies at the start of each wave, columns of aliens would fly in from the left and right, presenting an opportunity to take a few out before they fell into formation – if you could hit them.  Fortunately, unlike Space Invaders and Galaxians, your Galaga ship had the ability to fire multiple missiles, rather than waiting for each to hit home before you could launch the next, and this was absolutely necessary in Galaga due to the speed of the enemy ships.

Once the enemy ships were in formation they would begin to attack, and like Galaxian’s, small groups of attackers would break off and dive bomb your ship, requiring you to either avoid them and their missiles, or stand firm and destroy them for extra points.  Care was needed to avoid being trapped in a corner due to the angle of the dive, and also look out for the bigger ships which need 2 hits, although they do change colour after the first hit to remind you.

With each hit you are rewarded with a great sound effect, sounding like a kind of high pitched squelch, similar to the sound of pac-man eating a pill.  With the speed of Galaga, the sound created was a constant chattering and chirping that was an audible reminder of the success of each shot.

At certain points, the large green and blue “boss” aliens at the top of the formation would dive, and half way down the screen fire a tractor beam towards the player.  You have 2 options here, either destroy the boss before he grabs your ship, or allow yourself to be “beamed up” by the alien and lose a life.  At this point your ship is returned to the formation, and will begin to attack your remaining vessels along with it’s wingmen.  If however you can destroy the wingmen of your captured ship, it will be returned to you giving you a “double ship” with twice the width but also twice the firepower.  This extra firepower comes in handy from stage 3 onwards…

Starting at level 3 (and every 4th stage after) you will be presented with a bonus round, where the Galaga ships would fly onto the screen and off again, following erratic flight formations, whilst you try to shoot them all down.  The trick with the bonus level is to find the point on the screen through which all the aliens must travel repeatedly, and at the slowest point of their flight, in order to maximise your chance of hitting all of them.

After 5 waves, each having 8 enemies, you are given a bonus score based on the number of ships you manage to take out, with 40 (obviously) being a perfect score. Hitting all the enemy ships see you rewarded with a special bonus of 10,000 points.  It is possible to score a perfect 40 without a twin ship, but it makes it a lot easier so is highly recommended.

There is a bug in the system that means that only player 2 can score more than 999,990 points, as player 1 is limited to 6 characters for the score.  You’d better get a screenshot though, as only the first 6 digits will display on the high score screen regardless of player number.

The Galaga game appeared in the movie War Games starring Matthew Broderick, as one of the “latest games” his character downloads from the hacked servers of the an un-named computer company.
At the time I thought this was a fantastic idea, and wanted to make me build my own computer to play arcade games, it’s only 30 years later that I actually managed it with my MAME project.
Looking back the idea of downloading a game from a remote computer to play at home was like witchcraft, whereas 30 years later you can do it on your mobile phone. Back then Matthew Broderick needed his own computer and a dial-up modem with an acoustic coupler, all very exotic stuff.

Galaga was released on number of home consoles and computers, the most notable being the Atari 7800 and NES versions, as well as a later port to the Gameboy, where it was bundled with Galaxians.  Modern consoles can access Galaga through the Namco Museum compilations, and it has also had the iPhone treatment as part of Galaga 30th Anniversary Collection,  which is available as a free download from the iTunes store.

Of all the home versions I would have to go with the NES release as being the most faithful.  Despite playing all of the recent conversions and compilations I can’t recreate the feeling of playing Galaga on an upright machine, so when I am in need of a fix I will head back to my MAME cabinet, which takes me all the way back to the summer of 1981.