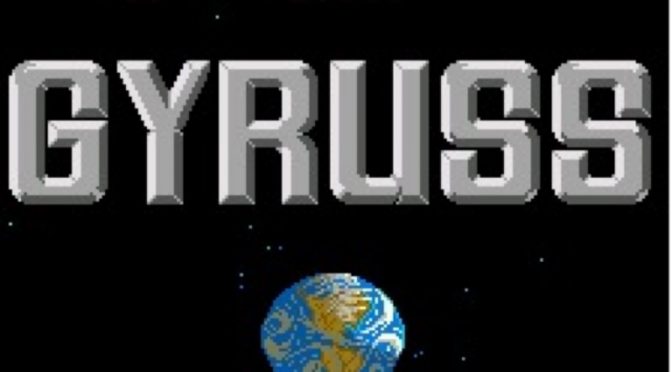 I found this game on holiday in Spain, around the same time that I discovered another Konami classic, Track & Field. This was in the early 80’s, a time when games arcades were massively popular and new games were launched seemingly on a weekly basis.

Gyruss was a memorable arcade shooter for 2 main reasons, the first being the Tempest-like 3D perspective, where your ship travelled in a circle around the screen, with aliens emerging from the centre and flying out towards you. The aliens also fired various missiles as you spun around the edge of the screen, which was slightly disorientating as you looped left to right and top to bottom. Clearing each section advanced you closer to the next “planet”, flying through the solar system.

The other memorable feature for me was the fantastic music, a version of Bachs Toccata and Fugue that perfectly matched the pace of the action on screen. I would play for the music alone, which seemed to blast out of the speakers on all the cabs I played this on.

Between stages there were bonus sections, which Galaga-style allowed you to rack up points for clearing all enemies on a specific flight path. If you managed to shoot the mother ship you would pick up a “double fire” bonus that helped you clear the bonus screen more easily. This was a great risk reward mechanism, as the mother ship was well armed and defended by wingmen, and you had to work for it.

Simple in format but a great score chaser, you could play this all day and not get bored.

Apparently this was released on the NES – And here is a great review by Nintendo Legend. Gyruss was also released on the Atari 2600, which could only be a disappointment after the brilliance of the arcade original. The game even made it onto XBOX Live arcade, remastered in HD.

Gyruss Coleco for Colecovision Cartridge cartridge Only NEVER USED A14