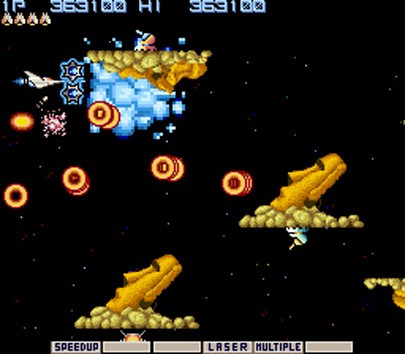 The local arcade near the station where I grew up had a Gradius machine (aka Nemesis), and it was my first experience of a shooter which I had to “learn”. My previous favourites, Galaxians, Galaga, Phoenix etc. all had simple patterns and no power ups, and so were very easy to pick up and you played them more instinctively than by learning movement patterns. Although Phoenix did have a rudimentary end of level challenge, Gradius was also my fist experience of shooters with multiple bosses, that could only be beaten with regular practise and a lot of 10 pence pieces.

Gradius was a side scrolling shooter that like R-Type, had an organic feel, with a mechanical / biological enemies and architecture, including Easter Island heads and flaming dragons. It also had a power up system, but unlike R-Type, was controlled by the user with a novel risk / reward system. By picking up power-up cells, a bar at the bottom of the screen would light up the next power up in the list, starting with speed up, and later lasers, missiles, bombs and a force field. You can select the power up lit, or wait for the next power up which left your ship vulnerable for a while but gave you greater power. Some screens required specific powers, such as the laser for clearing a path on the screen, or homing missiles to clear gun turrets at the top and bottom of the screen, and this added to the challenge.

Knowing where to place the ship during certain stages, when to power up, and how to defeat the bosses meant that Gradius required many hours of practise to master. Adding to the difficulty was the fact that your powers were all removed when your ship was destroyed, and in many of the later stages this resulted in certain death due to the time taken to level up again.

This difficulty level resulted in one of the most famous cheat codes being implemented in certain home versions, the so called “Konami Code”, which was added by a programmer to help with testing, by giving the player full power ups whilst the game is paused. If you have a NES version of the game, try entering “UP, UP, DOWN, DOWN, LEFT, LEFT, RIGHT, RIGHT, B, A. Also well known for the hilarious sequel “Parodius” (Parody + Gradius) which replaced ships and aliens with flying pigs and scantily clad women bosses, and even later sequel “Sexy Parodius” which just had more naked women.

One conversion that shouldn’t work but somehow manages it is on the origibal Gameboy.  Given the basic screen resolution and monochrome graphics, a complex games such as Gradius would seem impossible, but Konami pull it off.   If you have an original Gameboy I highly recommend the Gradius cart.

Less popular than R-Type, possibly due to the level of difficulty and the investment required to master, but a great shooter worth investigating if you didn’t the first time around.