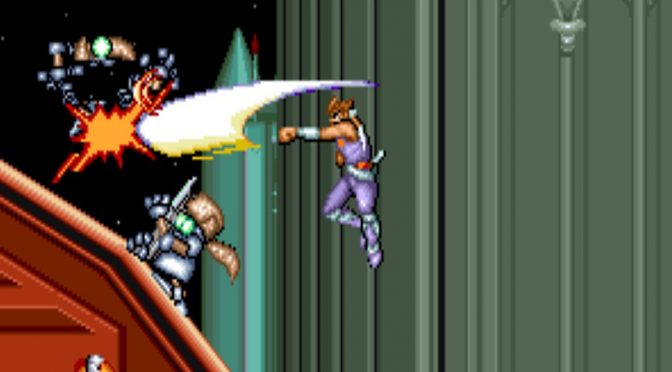 My first introduction to Capcom’s Strider was not through the arcade cabinet, but the excellent Megadrive port, which was like nothing I had seen before, with it’s huge sprites and fantastically varied levels and incredible bosses – it was an arcade revelation.  At it’s heart, Strider is a side scrolling beat-em-up, but that simple description does the game a huge injustice.

Set in a futuristic world, your “Strider” Hiryu must leap and slash his way through 5 levels in order to defeat the evil Meio, whose army has taken control of several European states.  The mission begins with Hiryu flying in on his hang-glider, before he leaps into action in the first level, a Russia themed location.  The first thing that grabs you is the size of the characters and the detailed animation, with Hiryu able to leap directly upwards, or cartwheel left of right.  He can also grip onto platforms above him, grappling across chasms, and perform a sliding tackle move.  His main weapon is a light sabre that is used to perform rapid slash movements to dispatch enemies.

To help Strider Hiryu on his way, various power-ups can be obtained including wingmen in the form of a small robot, a big metallic cat and a mechanical hawk, each of which feature their own special moves and animations.


The five levels include the Russian location, snowy Siberia, a flying warship, the jungle of the Amazon and finally Meio’s Moonbase.  Each level is distinctly different in terms of the format, the enemies and tactics required to complete, and within each level there are mini-bosses, as well as end of level bosses, depicted using hugely detailed sprites.  Stand out bosses include a terminator-style mechanical gorilla with a huge reach, and a looping snake monster that needs to be beaten by jumping on it back.

One thing you realise very quickly is that it is HARD.  Strider only has 5 levels, but to see all of them will have cost you a few 10p pieces back in the arcade, as death was frequent and certain points in the game were very tough to navigate.  Thankfully the Megadrive port was incredibly faithful to the arcade orginal, and allowed you to perfect your technique without costing you a fortune. In fact the console conversion was so good it made it into my list of Top 10 Megadrive / Genesis Games.If you haven’t had the chance to play Strider, I recommend this is the best way of sampling one of CAPCOM’s finest games and a real retro classic that represents the pinnacle of 2D arcade gaming.

Due to the popularity of the original Strider games, the series received a reboot in 2014, entitled simply Strider, but for the purposes of this article I’d call it Strider 3. The game was launched for the latest XBOX One and Playstation 4 platforms, as well as the last generation XBOX and PS3, and followed the original Strider story, as Hiryu battles against the evil Grandmaster Meio.

I’ve yet to play this version, but it’s on my growing list, and it will be interesting to compare this version of the Strider universe with the fantastic arcade original.

Thanks to The Games Shed for recording this video specially for me, please pay the shed a visit at www.thegamesshed.co.uk.