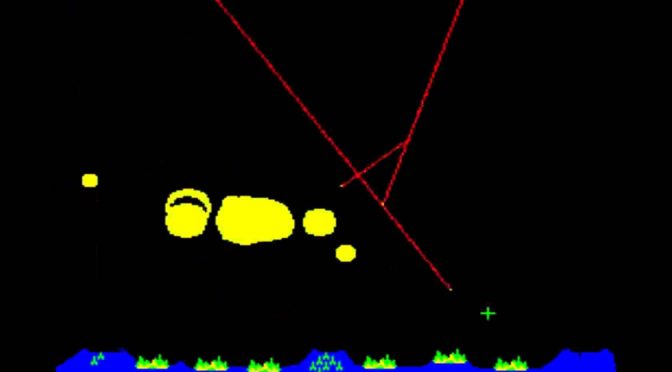 In the early 80’s we were at the height of the nuclear arms race, and the Doomsday clock representing our proximity to a nuclear war between the west and the Soviet Union was at 11:57. Released at the start of the escalation in 1980, Missile Command was a game that came to symbolise that arms race, painting a bleak picture of our chances should the war ever happen.

Charged with control of three anti-missile bunkers, your mission was to defend 6 cities at the bottom of the screen from attack by missiles raining down from the top. This classic arcade game from Atari was one of the first to feature a trackball, a kind of large upside-down mouse wheel, as opposed to the usual joystick control.

You had 3 missile bases from which to launch counter-measures, which destroyed the missiles in mid flight before they could hit your cities, with each missile base having it’s own fire button.

The cursor on the screen controlled where your counter measure would strike, and you had to time firing to ensure the explosion caught the incoming missile in it’s halo.

Careful tactics were required to prevent using up your limited supply of ammo, so timing a shot to take out more than one missile was key to getting to the higher levels of the game. You could also allow a missile to strike a destroyed city and conserve your arsenal.

Destroying all missiles in a wave and keeping at least one city alive would allow you to progress to the next, faster wave. There was no end to the game, just ever faster and more agressive missile attacks, resulting in some frantic trackball spinning.

One of those simple but maddeningly addictive games, it was transferred to home consoles but never quite the same without the speed and accuracy of the trackball.  One of the most successful conversions, despite the blocky graphics and lack of a trackball was the Atari 2600 conversion, which was remarkably playable and captured the essence of the original.  It also featured some great box art, with evocative images of the missile launch control.

More recently the game has been recreated for iPad and iPhone as part of Atari’s Greatest Hits, but is spoiled by the touch screen controls, and only really playable using a bluetooth controller (see my review of the iCade controller).

A great game that sadly is no longer playable in its original form as most working cabinets are now in the hands of private collectors, and finding one in an arcade is very unlikely, at least in the UK.