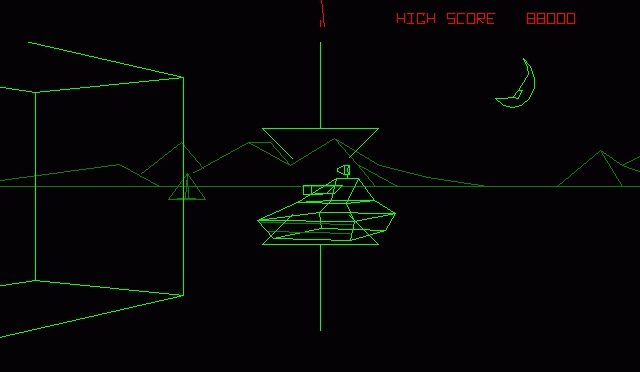 Battlezone was a truly unforgettable game from the early days of the arcades, that saw you in control of a tank in a 3D battle against enemy vehicles and space ships, set in a dali-esque landscape of cubes and pyramids.

Battlezone used wireframe vector graphics technology, the same technology that was used in the classic Asteroids, and perfected in the original Star Wars Arcade game. Rather than using a matrix of dots on the screen to make up an image, as used in more common “raster” screen technology, vector screens drew lines directly onto the screen using the cathode ray. The phosphor on the screen glowed just long enough for the line to appear solid and the ray had a chance to redraw the next frame, hence the slight flicker associated with the technology. Due to framerate issues it was impossible to draw solid blocks of colour, hence the characteristic wireframe look to all vector games.

Whereas Asteroids was a 2D experience, Battlezone cretaed a 3D world where objects were continually redrawn based on the relative position of the tank, allowing you to drive towards and past them. Through clever use of parallax scrolling, where wireframe 3D objects in the foreground moved at different speeds to the mountains in the background, the Battlezone playfield also had a sense of depth and distance.

The control system was unique in that you had two parallel joysticks which controlled the two tank tracks, so pushing both forwards moved you forwards, push one to turn left or right, or opposite ways for a fast turn. The cabinet also featured a periscope-like hole through which you viewed the screen. This combined with the 3d had the effect of making the game very immersive, for a while you really were driving a tank.

The trick was to use the terrain to hide behind objects whilst waiting for the enemy to drift into your sights. To help with positioning you had a radar that showed the location of enemies, and due to the slow pace of the tanks, you often found yourself in a race with your opponent to rotate to the correct firing position and get your shot in first – too early on the trigger and you might miss, too late and you would be hit. Being shot yourself resulted in your tank being destroyed, indicated by an explosion and the screen being “cracked”, much better than just saying “game over”.

Reputedly used by the American military for tank training, this game was an instant classic and was converted into home ports for the Atari 2600 and also for PC (DOS) amongst others. I recently downloaded a great ipad port called VectorTankX which is well worth checking out.

Dec 2011 – Atari did eventually notice the similarity between Battlezone and the VectoTankX game, and have had it removed from the ipad store. Shame as this was a great app.