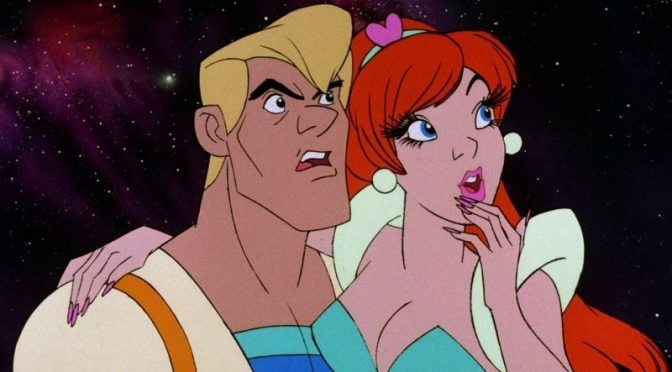 It was a wet summer holiday in 1984 and I was with my cousin in an arcade on Canvey Island in Essex. Frankie Goes to Hollywood was in the Top 10 with “Two Tribes”, and the famous fight scene between Reagan and Chernenko was blasting out of the video juke box. I looked up from the 2p falls at the voice emanating from a cabinet at the front of the arcade…

Space Ace – Defender of justice, truth and the planet Earth!

I walked over to the crowd forming around the machine, and that was me set for the rest of the summer.

In 1983 Cinematronics released the first Laserdisc based arcade game, Dragon’s Lair. This was a milestone in arcade game technology, effectively allowing a player to direct the actions of a character in a full colour disney style cartoon. The use of a Laserdisk player hidden within the cabinet allowed a film to be “played” on screen through the timing of joystick and key presses. Getting the timing or input wrong resulted in the film switching to a context sensitive death scene, effectively rendering the game to a test of memory.

Whilst the gameplay was so-so, it was the quality of the animation, which was by Disney veteran Don Bluth, which kept players coming back for more.

Hot on the heels of Dragon’s Lair was 1984’s Space Ace, which in contrast to the first game’s medievel theme, was much more futuristic, and I felt much more fitting with the technology.

You played hero Ace, who has to rescue his girlfriend Kimberley from the evil commander Borf. Borf has a secret weapon, the Infanto Ray, which he uses to zap Ace back to his childhood form, hampering his mission.

Cue much timed jumping between floating platforms, dodging laser blasts and flying spacecraft through obstacles on a journey to save Kimberley and the earth from the evil blue alien (which was also voiced by Don Bluth). Seeing the game through to the end rewarded the player with a feeling of real accomplishment, that they had mastered the machine and seen all the great animation had to offer.

Although badly replicated on a number of platforms as a graphics only based game with no video footage, it has been translated to DVD/CD-ROM and now Blu-Ray, allowing it to be played at home in an approximation of it’s former glory. For traditionalists it is also possible to emulate on a PC if you have a copy of the original laserdisc files and an emulator (see Daphne).

Many retro gamers will remember the Amiga and the Super Nintendo versions, neither of which managed to capture the spirit of the original.

This is not a game for everyone, and many will state it was a passing fad and rightly so – the format was not long lived. You could claim it’s not even a proper video game, as you are never really in control of your character, you are just learning a pre-defined path through a video. But for me this was a great arcade experience, a blockbuster summer movie that you could actually interact with, and whilst the technology now might seem clunky, and the gameplay limited, it was a experience that no-one who played it could forget.