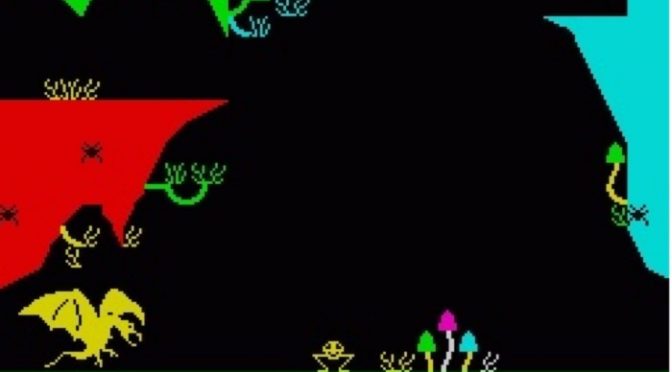 Back in 1983 the choice of Spectrum games was pretty limited, but one that stood out for me was this game – Bugaboo! Written by two (probably) Spanish zoologists (Paco & Paco) and it shows, with the game premise seeming somehow European…

The objective of the game was incredibly simple. Your frog (it was actually a flea called Bugaboo but I thought it looked more froggy) is dropped into an alien gorge, and you had to use the natural features of the landscape to jump out. Controllled using just two keys, to jump left and jump right, the game required you to time the length of the key press to make Bugaboo safely jump the right height to a ledge above him.

To complicate this, the jump meter was very twitchy, and difficult to judge accurately. There was also a time limit imposed by a dragon, who would fly in after a certain period and try to eat you. Just to add a bit more drama to the proceedings. A bit like the big chicken in Chuckie Egg.

To help matters you could use the cursor keys to browse the playing area, which is bigger than screen, and plan your jumps several moves in advance, plotting a course through the maze of ledges.

Bugaboo featured some well defined and colourful graphics, which complimented the simple yet addictive gameplay. I can remember playing for hours at a friend’s house and getting in trouble with mum for coming home too late. I also remember copying the game using a twin cassette recorder, and for this Quiksilva I am truly sorry.  If it’s any consolation the game refused to load every time, and I spent more time playing with the tone control on the cassette player than I ever did playing the (pirated) game.

A winner from Quicksilva, a novel idea very well executed the (then) fledgling Spectrum.

If you want to read more, a history of the game can be found here – useful if you an speak Spanish though