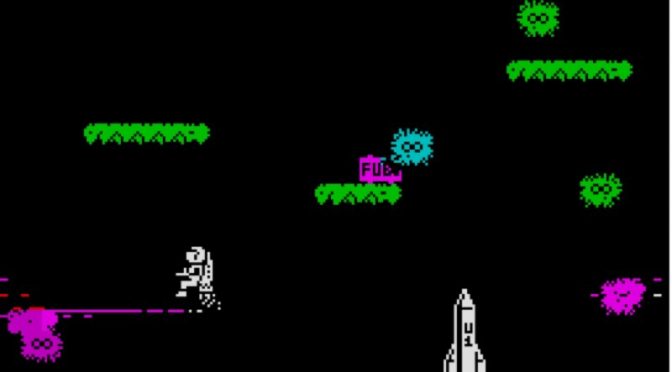 JetPac was one of the first of the games released for the early 16k Sinclair ZX Spectrum computer, and developer Ultimate managed to fit a lot into the tiny memory. This game didn’t fit into any easily definable retro gaming genre, as it had a number of elements, being part shooter, part action-platformer.

What it did do was deliver to early adopter Spectrum owners the arcade experience they had been looking for in their humble home computer.

Due to the memory constraints of the basic Spectrum model, JetPac did away with mutiple screens and stuck to a very simple formula. Use your JetPac to collect space ship parts that fall from the sky, kill the aliens that try to attack you, build a rocket from the parts and take off in it when its complete. Then do it all over again, repeatedly, until you die. And that’s it.

Despite the simple premise, one which would not hold the attention of many 10 year old game veterans today, Ultimate managed to build a sense of achievement into JetPac, as well as a desire to progress further through the game. You were pushed to tackle just one more screen, in order to see a new alien type with a different attack pattern. Every few screens you would get a new rocket, starting with an Apollo 13 style vehicle, and ending with a space shuttle (Tetris on the Gameboy also did this as a reward for completion).

There was also a great sense of colour in the game, from the garish alien designs to the multi coloured laser blast, but again due to memory limitations the only sound was the squeak of your laser and the plop when the aliens were destroyed.

JetPac was a masterstroke of packaging in a time when memory was incredibly expensive. Developers Ultimate had to think about not only the gameplay but how they could most effectively fit it into the space available, and maximise the number of Spectrum owners that could play the game.

A sequel to JetPac was later released entitled Lunar Jetman, this time for the 48k Spectrum, with better graphics, a lunar buggy to ride around in, and more varied gameplay.  It was also incredibly hard, and as such not as fondly remembered as the original.

JetPac was also released on the Commodore 64 and the BBC Micro, but was most popular on the ZX Spectrum, and with this game Ultimate set a new standard for gaming on the home computer platform for other developers to follow.