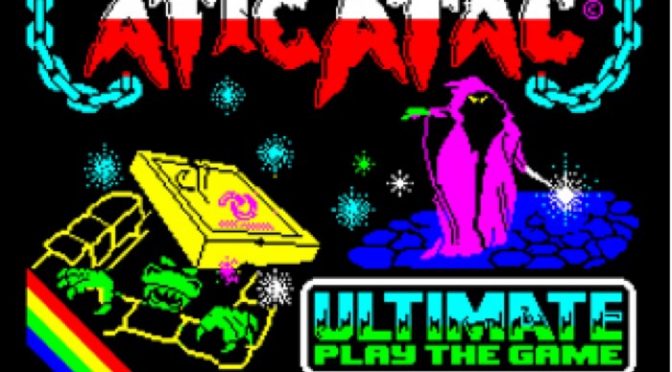 Well before I discovered Atic Atac, my first experience of Spectrum gaming was from Sinclair’s own game label. It was a fairly lumpy product called Horace Goes Skiing. Whilst a world away from the silent black and white ZX81 which I had just graduated from, I soon got bored of these early Spectrum offerings, which had no depth and very little replay value.

Soon developers began to unlock the full potential of the little rubber buttoned machine, and at the head of this movement were the Stamper Brothers, and their company – Utimate Play the Game. Early games such at Jetpac, Pssst! and TransAm games were massively addictive, with smooth scrolling graphics, large colourful sprites and novel gameplay, with that all important replay value.

After these initial successes, Atic Atac was the first in a series of action adventure games, featuring larger play areas and huge puzzles to solve, providing a much deeper game experience. The game was set in a haunted castle, your mission to find the parts of a key that would allow you to escape, without first eing overcome by the many monsters therein.

The castle setting of Atic Atac was spread over 5 floors, including subterranean dungeons, and the haunted attic of the title, and was riddled with secret passages that had to be learned in order to progress. You could play as a Knight, Wizard or Serf, with each character having their own unique weapons, and the ability to use specific secret passages. Atic Atac was quite punishing, with your character faced with a continuous onslaught from the various monsters, some of which could be destroyed, some just avoided. Life in the representation of a roast chicken could be restored by eating food found lying around the dungeon. Not that food found on the floor should be eaten anyway, but mushrooms were very dangerous and actually drained life.

Picking up coloured keys allowed access to different coloured doors, and you could also climb up and down stairs to access different levels, or use a trap door or other secret passages mentioned earlier. Once you had the levels of Atic Atac mapped, you had the solution and it is possible to complete the game in 3 minutes or less, but the fun was in mapping your route. With the 3 characters having different skills and routes to complete the game, Atic Atac certainly had some replay value after completing the first quest.