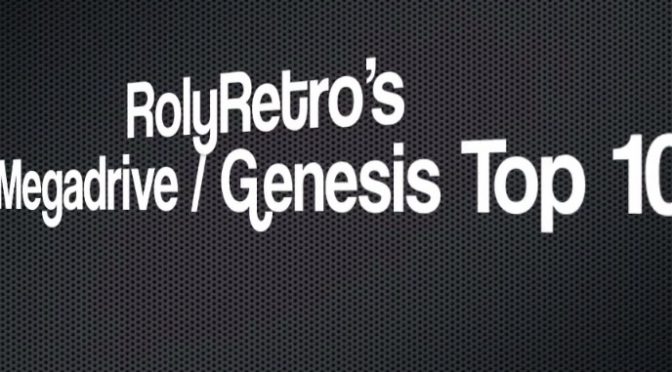 An All-Time Top 10 List of Games for the Sega Megadrive – 10 is not enough!

The Sega Megadrive (Genesis in the US) created many a playground row, mainly with loyal Super Nintendo owners who insisted that their machine was superior.  In reality both were great machines, capable of producing arcade quality graphics, and each with its own catalogue of unique games.  Today I’m looking at the best games for the Megadrive, based mainly on my personal favourites. I’ve also backed up with some research and feedback from the web, retro games forums and my friends on Twitter.

For a console that had many hundreds of quality games released, this is no mean feat. I think any Megadrive owner will find something here to relate to – if not please let me know the error of my ways!


So without further ado, my Top 10 Sega Megadrive Games of all time.

The Best of the Megadrive Shooters

The Megadrive had no shortage of great shooters, from the ThunderForce series to the fantastic Gynoug, but for the me the best was a game from Namco called Aero Blasters (aka Air Buster). Unlike some shooters which are overly reliant on the amassing of a huge arsenal of weapons in order to progress, Aero Blasters focuses more on old school avoidance tactics.  Progressing to later levels requires a steady hand and memorising ship movements and bullet patterns, presenting a real challenge to even the most hard core shmup fan. The levels themselves are hardly groundbreaking, featuring shooter staples ranging from bright coastal areas through to dark caves and mechanised fortresses, as well as huge and fiendish bosses to defeat. What the game does do well is maintain a fantastic pace, with no hint of slow down despite the huge number of enemies, bullets and explosions that seem at times to completely fill the screen.

No Megadrive Top 10 would be complete without a decent shooter, and although it was a tough choice with so much to choose from, Aero Blasters is my pick of the bunch.

Golden Axe was one of those arcade games that was best played with a friend – and once you got started it had to be played through to the end.  The first conversion for the Megadrive was a great game, and the sequel was, basically, the same.  But better!

There is a bit of a “sequel” theme running through this Top 10, where games that were already good are made truly great with small but significant enhancements.  This is true of Golden Axe 2 which is identical to the first game, set in a fantasy medieval world, where you play as one of 3 warriors, a barbarian, an Amazon and a dwarf battling through 7 stages to defeat the evil Dark Guld. Where the sequel differs is in the small details, the improved fighting moves, more controllable magic, as well as better character and background graphics.

Many people criticised Golden Axe 2 for being being too similar to the original, but experienced in isolation it is a great game, and a firm favourite amongst Sega Megadrive owners.


The 16bit Megadrive was ideally suited to arcade conversions, and Sega had a great back catalogue of games to plunder. We’ve already covered Golden Axe in this Top 10, and the next game to get the home makeover treatment is iconic platformer Strider. Famous for its huge sprites, multiple mini bosses and incredibly detailed graphics, Strider at times feels more like an animated film than a game.

Your character, the Strider of the title, runs, somersaults, dives and slides acrobatically through the 5 varied levels on a mission to defeat the evil Grand Master.  Along the way Strider must defeat all manner of enemies, with the help of his mechanised pals, including an eagle, and a huge robot panther.

As well as being one of my Top 10 Megadrive games, this is also one of my favourite arcade games, and you can read the full review here.

The Shinobi series of games follows a tradition of side-scrolling platform games, such as Ghouls & Ghosts and Contra, that offer players a real challenge, games that require patience and continued play in order to progress – a contrast to many of today’s “casual” games.

Revenge of Shinobi is the second game in the series, and sees your character Joe Musashi battle against the criminal Zeed clan, who have kidnapped Joe’s wife in revenge for their defeat in the first game.  Joe uses traditional Ninja weaponry including throwing knives and stars to fight his way through 8 levels, starting in Tokyo and finishing up in New York.  In addition to his weapons, Joe also has access to special magical attacks that can act as smart bombs, wiping out multiple enemies, as well as improving jumping and defensive capabilities.

The bosses in Revenge of Shinobi are famous for including likenesses to  famous comic book characters, Batman and Spider Man, and for a cameo from Godzilla.  Later versions were adjusted for legal reasons, although Spider Man was officially licensed and was retained in all versions.

Attack of the Armoured Opossum

Video games are not short of bizarre animal mascots – such as Sonic the Hedgehog, or Crash Bandicoot, but none quite as strange as Sparkster the Opossum, star of Rocket Knight Adventures.  Konami’s game was a side scrolling platformer similar in style to Gunstar Heroe’s, featuring slick animation and huge screen filling battles and explosions.

Rocket Knight Adventures features a complex storyline, which can be boiled down to Opossums vs. Pigs.  Sparkster was the most heavily armed marsupial ever, having a full suit of armour and a working rocket pack, which could be used in short bursts to traverse obstacles and attack the enemy porkers.  Some of the gameplay and animation is reminiscent of Metal Slug, with various vehicles such as tanks being used by the enemy forces.  As well as classic platform levels, there are shooter style flying levels, with Sparkster shooting waves of enemies attacking from the right of the screen.  There is a great sense of humour in the gameplay, with some wonderful sprite animation, as well as huge multi-part bosses that require use of the rocket pack to attack weak spots.

Rocket Knight Adventures never had the following of many

Gunstar Heroes for the Sega Megadrive

Why are retro video games worth saving?