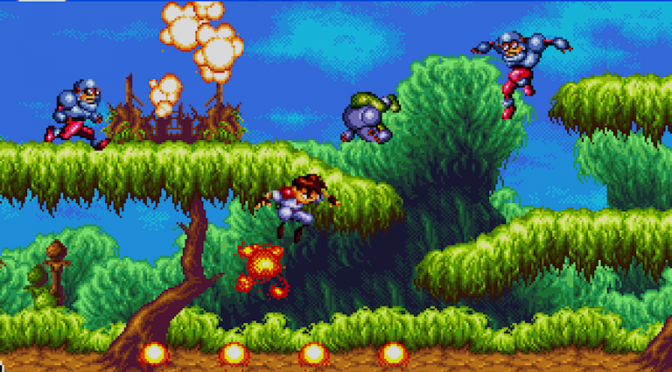 The Sega Megadrive was never short of great games, but developer Treasure managed to create a smash with Gunstar Heroes, it’s very first commercial release in 1993. Back then the name Treasure was relatively unknown, well before they received worldwide acclaim for games such as Bangai-O, Sin & Punishment and Ikaruga.

Gunstar Heroes uses the horizontal run and gun format familiar to players of Contra, Metal Slug and Forgotten Worlds, scrolling left to right with multiple platforms and routes through each level.  An over-complicated game intro establishes that your heroes “Red” and “Blue” have to cross deserts, aerial platforms, caverns and huge battleships on a mission to rescue Red’s brother “Green” from the evil “Black”.

There are 7 levels to complete, each featuring unique locations and level bosses, and a whole bunch of minor enemies and mini-bosses to defeat along the way. In fact so many that the screen sometimes seems filled with sprites, projectiles and huge blooming explosions, all of which dont seem to incur any kind of slowdown from the 16 bit heart of the Megadrive.

You can choose from 4 weapons, Force, Lightning, Fire and Chaser, which can be combined to make hybrid weapons, which give different perks and allow for different playstyles. In two player mode you can even work in tandam, throwing each other at weaker enemies being another way of destroying them as well as the huge bosses.

Bucking convention, you could pick from any one of 4 levels to start, allowing you to take different routes through the game should you get stuck, which due to the advanced difficulty levels, would often happen. Death would come when you took a certain number of hits and drained your power bar, giving you the opportunity to quit the game or return to the start of the current level.

As with all Treasure games to follow, the sprites were incredibly detailed, and they wrestled every last inch of processing power out of the Megadrive, with the kind of graphical scaling and rotation normally associated with the FX chip augmentented Super Nintendo.

Some of the stand out moments include the “sand” boss, created from shifting blocks of sand forming different shapes including a “running man”, a Treasure hallmark, with this character also featuring in later shmup Radiant Silvergun.  There is also a “boardgame” level full of bosses, and a mine level featuring an Indiana Jones style minecart chase.

Getting hold of Gunstar Heroes these days is hampered by its relative rarity and cult status, but you can still obtain a copy on ebay for around £20, and you can also find it on the Sega Megadrive Classic Collection, with 3 other games – which bizarrely is cheaper.  360 owners can also download from XBOX Live Arcade.

There was also a sequel, Gunstar Super Heroes on the Nintendo Gameboy Advance, which had great reviews but didn’t achieve the same cult status as the Megadrive original.

Whilst not selling in the volumes it deserved, due to Treasures’ lack of previous form at the time, and any kind of marketing muscle – it just couldn’t compete with the kind of money being spent on the Blue Hedgehog.  For lucky gamers who did stumble upon it, they got to experience one of the great games of the 16 bit era, and the birth of a developer who would go on to be recognised as one of the greatest.

2 thoughts on “Gunstar Heroes for the Sega Megadrive”