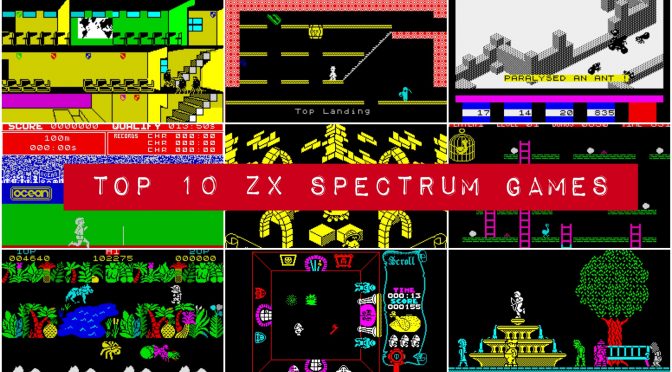 Every ZX Spectrum owner will have had their own personal favourites on Sinclair’s popular home computer, and I have drawn up a list of what I believe to be the best. My Top 10 is based on my experiences of innovative games, that even 30 years later will spark fond memories of the fantastic little machine.

You could claim that I have made some noteable exclusions, such as footballing classic Match Day, perennial favourite 3D Death Chase, and various games featuring the Spectrum mascot Dizzy. All I can say is that this is my list, and I have my reasons for every game included here.

I have also included a mix of 16k and 48k Spectrum games, as I owned both versions and early arcade titles that fit into the smaller memory could be just as good as the (relatively) memory hungry versions. Remember this is a time when their were no hard drives, every game had to be loaded from tape (or usometimes micro-drive) directly into memory whenever you wanted to play.

So in no particular order, my Top 10 Spectrum games…

Every Spectrum owner will have played one of Matthew Smith’s classic Spectrum platformers starring Miner Willy. The first game, Manic Miner, was a sensation and its sequel, Jet Set Willy was even better. 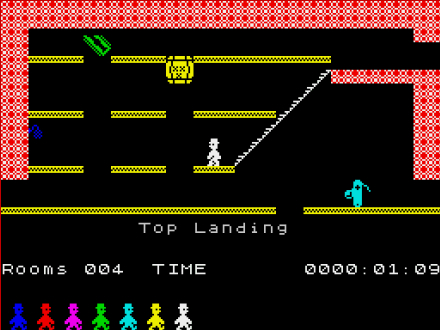 Having made his money in the first game, Miner Willy has bought a huge mansion and held the mother of all parties. Before he can go to bed, the housekeeper is inisiting on him tidying up the place, requiring him to explore the many rooms of the mansion and collect various misplaced objects. The first really good attempts at a platformer on the Spectrum, these games featured many tricky hazards including conveyer belts, melting walkways, devious enemies and also required some pixel perfect jumping skills. Jet Set Willy improved on the linear nature of the first game by allowing free movement between the rooms of the mansion, creating a truly unique sequel. 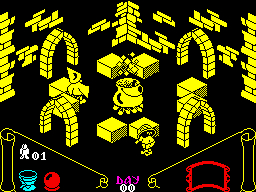 This was the first game from Ultimate to feature the innovative Filmation graphics engine, which enabled rendering a game world in isometric 3d. This viewpoint was subsequently used in a number of classic Spectrum games including Head over Heels and Batman. Knight Lore itself was the third in the series of Sabreman games, this time our hero suffering from a nasty case of Lycanthropy, resulting in him spending half the game in werewolf form as he explores a huge castle seeking a cure. Each room of the castle featured puzzles and obstacles to overcome, in order to access the ingredients required to place in a central cauldron and create a potion. A smash at the time, it was a huge leap ahead in terms of graphics on the Spectrum, and set a standard for other games to follow. 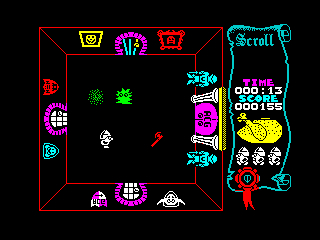 At the time this “haunted mansion” themed game seemed epic, a colourful and action packed game like nothing before it on the Spectrum. Your mission was to play as one of three medieval characters, each with different skills and different routes that must be taken through the game. Find the various pieces of key, avoid or kill the numerous monsters, and fight your way to the exit. This game featured some great graphics, shown from a top-down perpective, and some well animated creatures – but my favourite component was the chicken based life-meter which shows your character’s health.

One of many Spectrum games that required you to draw a map as you progressed in order to remember your way the next time, often resulting in lots of bits of A4 paper selotaped together as your map grew ever larger and more complicated. 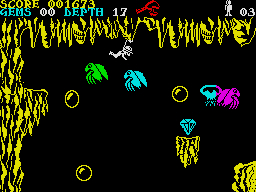 The sequel to Sabre Wulf, Underwurlde transported the hero Sabreman to a underground world, which saw him turned on his side and become a platformer rather than a top-down adventure. Much like Atic Atac and Sabre Wulf before it, the gameplay required you to explore a complex series of rooms, avoid baddies, and find specific items (in this case weapons) in order to escape. Along the way Sabreman would be required to jump gaps, climb ropes and ride on bubbles in order to traverse the huge maze of over 500 screens.

Some might say 3 Sabreman games in the the Top 10 but each had a different graphical style and unique gameplay elements that merit their inclusion. 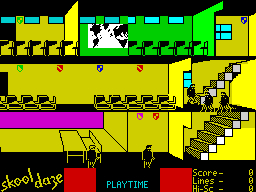 Another game that could really only work in the UK, Skool Daze was the closest thing to a Spectrum version of popular 80’s TV show, Grange Hill. Your mission was to survive the various challenges that school threw at you, from grumpy teachers through to evil bullies, and uncover the combination to the school safe, which held an incriminating report card. Get caught using your catapult, or any other number of misdemeanors, and you will be given lines, too many lines and you are expelled.

Another game featuring classic British humour, this was a unique game concept that was platformer, simulation, puzzle and adventure in equal parts, and a firm favourite with many Spectrum owners. 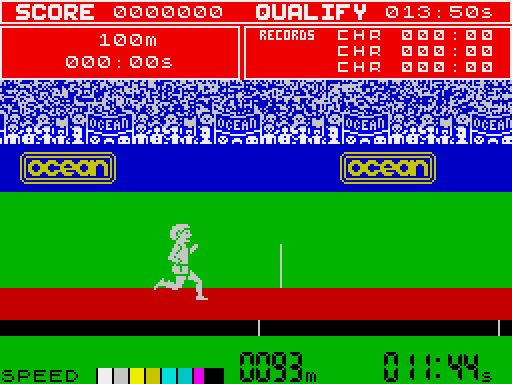 Famous for its ability to destroy joysticks, Daly Thomson’s Decathlon was a clone of the Track & Field arcade game, which required players to bash buttons and waggle joysticks furiously in order to make the on screen characters run, jump and throw their way to athletic victory.

Ocean’s version for the Spectrum featured popular decathlete Daley Thomson, and gave the player the opportunity to take part in all 10 events. The game featured some great animation, although slightly strange graphics in that the black Olympian was portrayed as an all-white sprite – probably more due to the limited colour palette and attribute clash issues of the humble spectrum than anything else. My personal favourite was the Javelin, which required maximum speed and just the right throwing angle in order to get a qualifying throw.

A great game and must feature in any Spectrum fan’s Top 10 list. 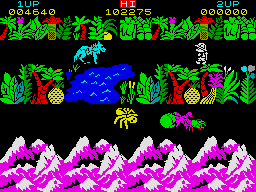 The third game from Ultimate in my Spectrum Top 10 game, this featured the first outing of Sabreman, reappearing in Underwurlde, in wolf form in Knight Lore, and finally as a wizard in Pentagram. Sabre Wulf was an adventure set in a huge flick-screen world of lush vegetation, back in the day when there were no maps on your head up display, if you wanted to find your way through the many screens you had to get busy with a pencil and paper. Avoid the jungle critters, collect 4 pieces of the amulet and you were free, but not without a long battle with numerous enemies and a lot of back-tracking through the game’s 256 screens. An obvious inclusion for my list of Top 10 Spectrum games. 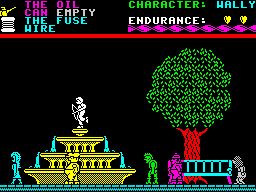 Microgen released the much loved series of platform / adventure games featuring the affable Wally on a number of platforms including the Spectrum. All of these games featured large colourful sprites and challenging gameplay, culminating in this version which allowed players to adopt the personas of various members of the Week family. Each had special skills which had to be used to full effect in order to solve the various puzzles required to complete the game, and each had their own health bar which had to be independently maintained.

A novel game with some innovative features, most Spectrum owners will have at least one Wally game in their collection. 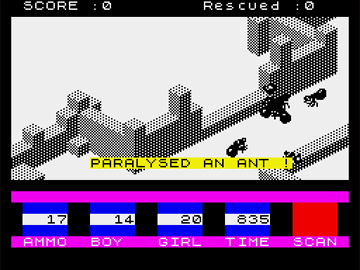 Before Ultimate kicked off the craze for isometric adventure games, Quicksilva gave us 3D Any Attack. Set in a scrolling isometric 3D world (think Zaxxon with movement in 4 diagonal directions), the objective was to rescue your partner, boy or girl depending on your chosen character. Avoid the giant ants, and climb ever more complex structures to locate your mate and escape the city, armed only with a few grenades with which to stun the overgrown insects.

Another unique Spectrum game, this was a great retro memory for me and still playable today. 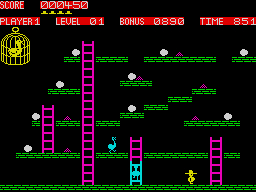 This game was available on a number of platforms, and everyone has their favoirite, but I loved the Spectrum version. As a farmer charged with collecting eggs from around a multi level henhouse, you used some fairly atheltic running and jumping skils to navigate the various levels and platforms whist avoiding the resident hens. Take too long to complete the level and the Boss Chicken would escape his cage and chase you around the level.

Some frenetic gameplay and excellent controls ensured that an apparently simple platformer became an enduring Spectrum classic and a dead cert Top 10 inclusion.

6 thoughts on “Top 10 Spectrum Games: the best Speccy games ever!”