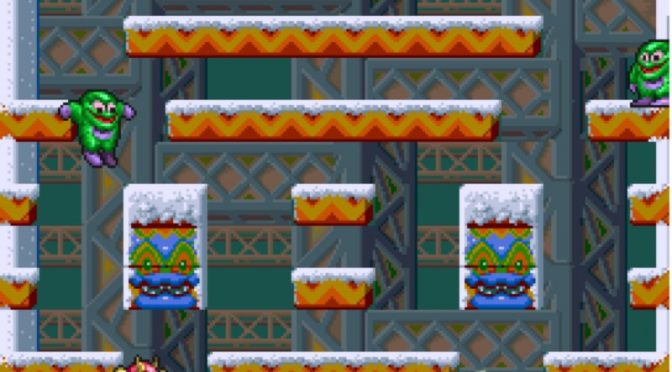 There are some games which I hesitate to write about, as they are so good I just don’t feel I will do justice to them, and I put them off to another day. On this list would be the original Star Wars arcade game, as well as the classic Track & Field, neither of which I am quite ready to tackle. Snow Bros may not be as well known as these games, but until now it was also on my list.

Snow Bros. was released by Toaplan in 1990, whilst I was at University, and my first experience was playing in the basement of the Student Union. My first thought was that the game was very similar to Bubble Bobble, with the bubbles being replaced with snowballs. My second thought was that I may have to ditch my afternoon lecture on microprocessors to play this game, it was that good. 20 years later and I am still playing Snow Bros, now on my recently completed MAME cabinet, and a recent late night game session prompted me to finally write this retro review.

Snow Bros is a platform game starring two brothers, Nick and Tom, whose mission is to rid the world of monsters, using the power of snow. Each level, which features different platform and monster combinations, requires you to destroy all of the enemies in order to progress to the next. Your Snow Brother achieves this by throwing snow at the monsters until they turn into snowballs, incapacitating them for a period of time. Kick the snowball, and it bounces around the screen and destroys the monster when it reaches the bottom, as well as killing any other monsters it encounters along the way.

The trick with Snow Bros is to turn as many monsters into snowballs as you can, without kicking them, and then kick one at the top of the screen to destroy all of the monsters on the way down. This generates a big bonus, in the form of currency which drop from the top of the screen and need to be collected quickly before the level ends.

There are various monsters to be found as you progress, each with different characteristics, requiring different approaches to destroy:

Take too long to clear the screen, and you will be attacked by an invincible pumpkin-head monster, which can only be slowed down with snow, not destroyed.

Destroying monsters gives you bonuses which come in two forms, either a piece of sushi for extra points, or a bonus potion that will give you extra powers, including faster movement, big snowballs and increased throwing range. A green bottle provides a special bonus, where your snow brother inflates like a balloon and whizzes around the screen killing everything he comes into contact with.

At the end of every 10 levels, which in classic Donkey Kong style, progress upwards, you will encounter a boss. These boss levels provide a break from the platform levels, and take some time to work out. There are 5 bosses to be beaten across the 50 levels in the game, including a giant lizard, a big pink head, and a pair of yellow birds, who can be destroyed by turning their weapons back on them. Each boss will have a different projectile to throw at you, and by turning these into snowballs, they can be kicked at the boss to cause damage, indicated by a health bar at the top of the screen.

Like many classic platformers, there are multiple ways to complete Snow Bros, and developing the optimum approach for each screen is part of the challenge if you want to progress to latter stages. Even then, this game is going to take some beating, with later levels a veritable minefield of enemies approaching you from all angles.

Few home conversions were made for this game, but there were good versions produced for the NES and the Sega Megadrive (Genesis), with the Sega version being the most authentic. There was also a version for the Gameboy that is worth a play.

Returning to the game now, I instinctively repeat the tactics learned on and off over twenty years, almost on auto-pilot, until I get to level 20 and above, when all tactics go out of the window and I switch to survival mode.

Snow Bros. may have caused me to miss a few university lectures, possibly cost me a grade or two, but it was worth it.