Snapper was one of the many quality arcade conversions that Acornsoft created for the BBC Micro, being a very faithful example of Pac Man. Anyone who remembers the early 80’s will have experience of Pac Man clones on every platform, many of them pitifully poor (yes Atari 2600 I’m talking about you).

Most consoles or home computers of the time did not have the graphical capability, and just couldn’t to replicate the complex maze structure. So the results were often a compromised mess that whilst playable, did not give you that “arcade at home” feel that gamers at the time craved.

Arcade Clones on the BBC Micro

This is where the BBC Micro shone due to its graphical capability being much closer to dedicated arcade boards of the time. Strange in that the BBC was an experiment in education, to teach IT in schools, and not designed as a games device. And yet the rendition of Pac Man was so faithful in Snapper that Namco took offence, and later versions of the game replaced Pac Man with a sort of grapefruit, and the ghosts with generic monsters. 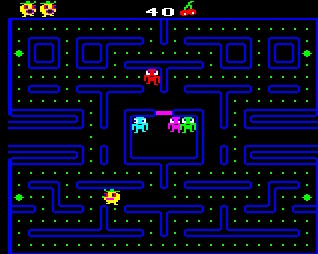 All other aspects of the arcade game are retained in Snapper, including the power pills and bonus items (with the Acorn bonus item a nod to BBC owners), and even the ghosts eyes escaping back to the central area after being eaten.

Rather than the ghosts in the BBC version having set patterns, they patrol their own corners of the maze, before breaking out to home in on the Pac Man. As the game progresses the ghosts become more aggressive, breaking out of the pattern earlier to chase you.

Snapper was a great PacMan conversion due to the graphical capability of the Beeb and a world away from the famously rubbish attempt on the Atari 2600.

Snapper gameplay on the BBC Micro

One thought on “Snapper retro game review for the BBC Micro”