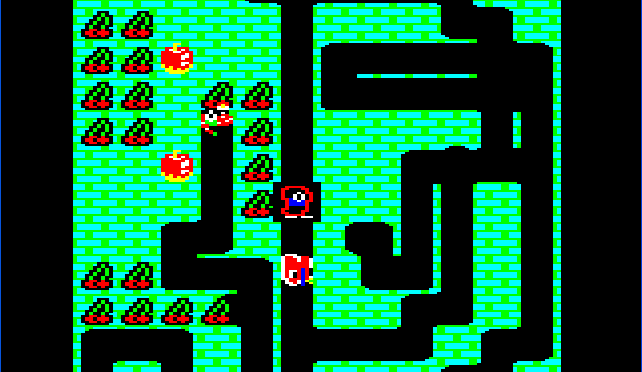 Mr Ee! came from a time when copyright law didn’t seem to apply to video games, otherwise this game would never have existed. Imagine taking the latest Super Mario game on the wii, copying it, calling it Super Dave and releasing it on the XBOX. That’s what Micro Power did with Mr Ee on the BBC Micro, a blatant copy of The Mr Do arcade game.

But there are plenty of blatant rip offs out there in video game history, and this is not the reason why Mr Ee needs to be celebrated. What it did, it did brilliantly, providing an almost arcade perfect copy of the original, recreated on a home computer whose primary purpose was teaching IT in schools.

On seeing Mr Ee playing on my friend’s BBC, a kind of cross between Pac Man and Dig Dug, I knew I had to have one. Everything from the full colour graphics to the manic (if repetitive) music, shouted quality, and to me it looked and played just like the game I had played in the arcades. It was the first time that I realised that commercial quality gaming was possible on a personal machine. It is no suprise to read interviews with Adrian Stephens (the programmer behind the game) had spent hours playing the game in the arcades and had wanted to recreate that feel.

Mr Ee goes back to a time when one programmer, part game fan / part self taught coder, could produce a commercial quality game at home and it become a huge hit, selling in thousands. Today this is just not possible, not even in the world of teenagers selling games through the app store. In this open market space a popular game will need programmers, artists, musicians, marketing teams and serious money in order to compete with the thousands of quality games available.

So hats off to the BBC and their indirect promotion of blatant plagiarism for the sake of the 80’s gaming public – it will never happen again.

One thought on “Mr Ee! Retro Review for the BBC Micro”