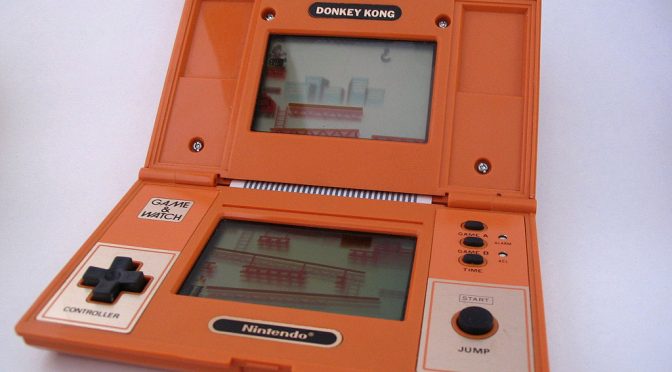 Nintendo’s most famous (if not the first) arcade game needs very little introduction, but the origin of the Game & Watch is less well known. Gunpei Yokoi, the Japanese creator of the Game & Watch series, as well as the Gameboy, got his inspiration whilst riding a commuter train, and watching a fellow passenger playing with an LCD calculator.

What if the same technology for displaying the digits on the calculator could be used to display character sprites?

Nintendo have proved over the years that existing technology, used in a novel way, can create all new products and markets – just look at the wii, not the best graphics, or the most polygons, but by incorporating accelerometers into the handset, created a whole new games market.. By creating a large LCD display, filling it with character sprites, and simulating movement by turning the sprites ion and off in n sequence, the Game & Watch was born.

Early games were simple affairs, games like Fire! which tasked you with catching falling victims from a burning building, using simple left and right controls and a single LCD screen. Later games became more elaborate, with the famous Nintendo D pad being used for controlling characters, and a novel double screen model which allowed play to carry across a larger area.

The most popular of these twin screen games was Donkey Kong, an incredibly faithful (given the limited graphics capability) conversion of the arcade game, and the first appearance of Mario. Looking like a small orange DS, the game flipped open on a hinge to access the screens and controls (D pad and jump). By colouring the rear of the screen to create the girders of the building, and also the ladders, the LCD screen itself could be used to display mario running, jumping over barrels, and even using a hammer. There was also a Kong graphic waiting at the top for you – albeit with a different mechanism for defeating him, involving jumping on a crane and pulling out pins to destroy the platform Kong is stood on.

At the time I remember playing a friend’s version of Donkey Kong, and not being able to afford one myself, being very jealous of his ability to carry this fantastic game around with him. About 5 years ago, I was browsing ebay and found one of these games for sale, and a week later it was in my hands, looking like it was made yesterday. Due to robust construction and use of watch batteries, these games are incredibly durable, and many early examples are still in existance.

There are many avid collectors out there, their mission to collect the 59 different versions of Game & Watch that were made throughout the 80’s and early 90’s, but I just wanted to get my hands on the one game I couldn’t have all those years ago. This has now been joined by other classic handheld games from Grandstand, CGL, Bandai and Tomy in my collection, but due to the gameplay Donkey Kong is still the one I return to the most.

One thought on “Donkey Kong Game & Watch by Nintendo”