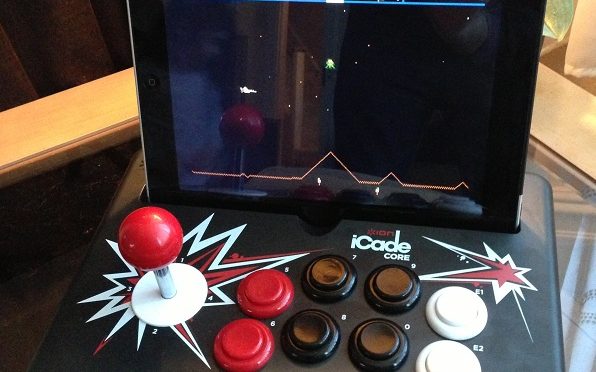 I’ve been struggling with the iPad as a games console for a while now. Whilst is has had some great games built around the touch and tilt controls, it’s never felt right playing the retro arcade games I love, due to the lack of feedback from the virtual joysticks and buttons.

Recently there have been a number of official games emulators released for the iPad by the likes of Atari, Midway and Namco, and although the games seemed to be replicated really well, they just felt wrong using the touch screen. It was like the iPad was constantly reminding me that this was an emulation, not the real thing – something that I have also experienced with PC based emulators like MAME. When peripheral maker Ion launched the iCade in 2011 I seriously considered buying one, but never got around to it – what if it was no good, what if it couldn’t play all the old games I wanted? MAME was only intermittently allowed on the App store, and with no guarantee I could use that to play arcade game ROMS, I wasn’t sure it would be worth the investment.

When the iCade Core was released, I reconsidered my position, the reduced price being the deciding factor. I didn’t necessarily want the reproduction arcade cabinet, it was the controls I was after and this (on paper) had everything I needed. After a bit of a hunt I found an iCade Core unit for sale online, and a couple of days later the parcel arrived.

On opening the unit I was pleasantly surprised by the packaging, as it felt like opening a toy from the 80’s, with the colourful box art promising all kinds of excitement inside. On unpacking the unit the first thing you notice is the weight, necessarily heavy to stop the unit toppling over under the weight of the angled iPad screen. The unit itself has a textured plastic finish, much like a retro video game console, and feels comfortable to rest your hands on. The joystick and buttons have a great feel, even before you attach the unit, and they clearly have micro-switches fitted, which instantly make the iCade Core feel like an authentic arcade unit. Insert the included AA batteries, and the game is ready to connect to your iPad.As there is no housing around the screen, the slot at the back had been extended to take both horizontal and vertical games, and as many of my favourite games are horizontal shooters, this is a great feature. Once the iPad (I have an original iPad 1) is inserted, you connect via Bluetooth to the iCade Core – there is space for a cable to allow charging whilst playing, but no physical connection is needed. Just press five of the buttons at a time until the red light on the iCade Core flashes, and then accept the pairing on the iPad. From here on in the iPad thinks of the iCade as a keyboard, so you have to use the touchscreen to navigate but you can’t search e.g. look for new games in the App store with the Bluetooth connected as the iPad won’t show the virtual keyboard.

I wanted to test the iCade with 2 of my emulator apps, from Midway and Atari. The Atari emulator was first up, having emulations of both 2600 games, and some classic arcade games. I downloaded the full set of 99 games for £6.99. First port of call for me was Tempest, which was a bit of a struggle, as was Missile Command, but then both of these games would have used custom controls, a spinner and a trackball respectively, so were probably not a good choice for joystick and buttons. I then played Battlezone (twin joysticks) and Breakout (spinner), before giving up as these old Atari game just don’t use standard controls! Not the fault of the iCade Core, more the attempt to recreate such ancient hardware, where every cabinet was bespoke, it was never going to be easy.

With the Midway collection I had much more success, given that the games were generally from a slightly later era when controls had standardised to joystick / button combinations. First up was my favourite, Defender, a true challenge for an emulator, and despite some subtle differences in controls was a complete riot to play using the iCade. The controls were not identical to the arcade but they felt right, and for the first time Defender was playable on an iPad, and I spent a few hours on this game alone. Next up were Tapper, Spy Hunter, Rampage and APB, all of which worked a treat and were as authentic an experience as you can get outside of a full size MAME cabinet. You can play it on your lap without too much of a problem but I recommend a tabletop for stability and any long playing sessions where it will be more stable.
In addition to the entries from Midway and Atari, Namco have released a number of old games on the App store, and many third party games with a “retro feel” are available to use with the iCade devices. Next on my list are some classic shooters, there are some great one’s available from (cave, eplaguda and some other examples) to invest in now that I know the hardware works.For a retail price of £50, and cheaper in many online retailers, I’d have to say this is a great buy for a iPad owning retro gamer – just make sure the games you really want to play will work with it.