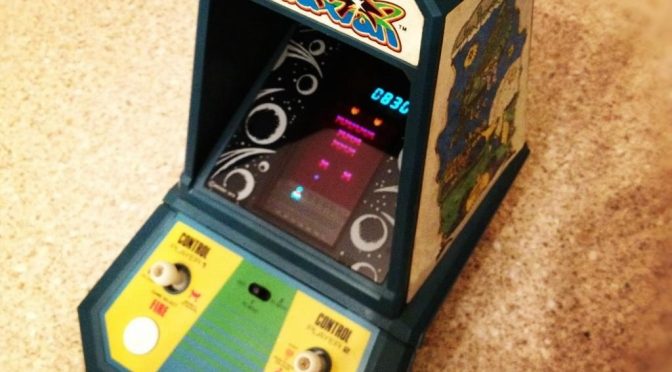 The holy grail of handheld games?

My retro games collection includes many of the consoles and home computers that I played (or wanted to play) with as a kid, but my favourite games are the handheld and tabletop units from the early 80’s. There’s something about the look of them, the brightly coloured plastics and graphics, as well as the weight – these were all substantial units that were built to last. The gameplay may have been rudimentary and repetitive, given the limitations of the VFD and LCD screens, but the games themselves were unique. Each one was crafted from the ground up for a specific purpose, a combination of console and software in one unit.

In the UK the most popular games were those from Grandstand and CGL, as well as units from TOMY. More rare were the exotic units from Bambino and Coleco, and as such much more difficult to get hold of. Of these rare units, its the games from Coleco have always eluded me. Of particular interest are the arcade conversions of the popular classics, including Donkey Kong, Frogger, Pac Man and Galaxian. These fantastic tabletop units replicated the shape and style of the aracde games on which they were based, as fully licensed conversions, which set them apart from all of the unlicensed clones that were produced in the early 80’s (see my review of Grandstand Munchman).

The colours and graphics of the original games were lovingly transferred to the handhelds, and passable versions of the games translated onto the colourful VFD displays, making them a target for both handheld game collectors and lovers of the original arcade units.

The Donkey Kong and Pacman games come up fairly regularly at auction, but much less so the Galaxian and Frogger units, so I was excited to find one on ebay recently – a mint Galaxian unit with a very low starting price and little interest shown by bidders. A couple of days later I was the proud owner of a Galaxian handheld for a very reasonable £36 – not much more than the cost of the original unit in 198?, and a lot less than the £100+ usually asked of these games.

After loading up with 4 heavy “C” size batteries I fired up the game, and was pleased to see both screen and speaker in working order, as were the controls, which felt like new – not bad for a machine 3 decades old.

The game itself is a reasonable representation of the arcade original, including swooping aliens breaking away from the main formation at the top of the screen to dive bomb your ship, firing missiles as they go.  There is even a 2 player option, with separate controls on the front of the cabinet, so Galaxian can be played with a friend.  The 2 player game involved player 1 shooting up the screen towards player 2 shooting down, with aliens in the middle who could be destroyed for extra points.

The real joy of Coleco’s mini Galaxian cabinet though is the unit itself, the colours and graphics, the attention to detail, it really is a minor work of video game art.  It fact it reminds me of the fantastic work being done by Justin Whitlock, who makes miniature versions of classic arcade cabinets.

Now to find the other games, just 3 more to go…