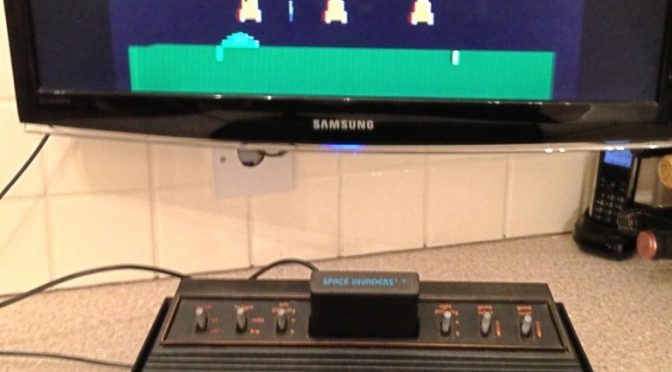 I’ve always had a soft spot for the Atari 2600, one of my first ever console experiences, and I have several in my collection. This is the second update on my latest 2600 restoration, and in the first blog update I focused on the cosmetic aspects – clearing away 30 years of dust and grime to reveal the fantastic console underneath.

So I have a shiny old console, the big question is, after 35 years does it still work?  As I bought 2 Atari 2600 units untested, without a power adapter, my next job is to find a way of getting it up and running.

Without an original supply, and no Atari branded units available for sale anywhere, I was forced to look for a modern equivalent.  A quick browse of the internet and the specification for the power supply is confirmed as a 9V 500ma DC unit, which was readily available from the local Maplin store.  Unfortunately the interchangeable pins were not the right shape for the Atari, and I had to return for an alternative set.  Second time lucky the pin fitted, and on turning on the machine, perhaps for the first time in years, was presented with nothing to indicate it was on, not even a hum.  I’d have to insert a cartridge and connect it to a TV to find out if it even powers up.

Using a Samsung TV which still has an old analogue TV tuner, I connected the Atari unit using the RF cable which is integrated into the console.  Tuning the TV was a little bit tricky, as I had to wade through the menu options to find the analogue auto-store feature which had never been used.   The TV cycled through the frequencies counting the signals found – a resolute zero until the magical channel 36 was reached when the channel count turned to a 1.  With the Space Invaders (what else?) cartridge in place, I waited for the screen to display the iconic images that would confirm my Atari was still alive.

Whilst the image was a bit fuzzy, the years of crisp PC graphics and more recently HD monitors spoiling me, it was definitely working.  Selecting the reset switch, the one player game started, accompanied by the unmistakable sound of alien invaders.  The joystick seems to be working, with the game playing just like a remember it, the pace spot on and as addictive as when I first played it back in 1980.  In fact I had been playing it for about an hour before I realised the time, and that I had a bag of around 20 cartridges to try out.

For the next couple of hours I relived memories of classic old games as I switched the cartridges in and out, with titles such as Asteroids, Galaxians and Stargate reminding me why I had loved the Atari 2600 so much in the first place – brilliant arcade conversions that should never have been possible on such basic hardware.  I was also reminded why the video game crash of the early 80’s was inevitable –truly abysmal games typified by the notoriously bad Pac Man, all flickery sprites and crappy gameplay.

My Atari joystick has however not stood the test of time, and whilst not obvious on games like Space Invaders, it can only register left, right and down.  On taking apart the handset (just 4 screws and a normal cross-head screwdriver) I had hoped to find some dirt on the contacts, but it was bad news, with the dome contact on the “up” circuit broken.

A quick look on the internet tells me that components to fix these old joysticks are not readily available, and so I put in a bid for another joystick which should be mine for less than a tenner.

My OCD is kicking in again, and I now want to collect all of the best Atari 2600 games, as well as replacing some with damaged labels and ink stained cases.  Perhaps I can clean them up and replace the stickers, it seems a shame to allow the games to go unrestored to their former glory.  Except maybe Pac Man, which if the stories are to be believed, should be in a Mexican landfill somewhere.

It may be that there are plenty of Atari 2600 games are still readily available on eBay, but it’s not like they are making any more, and every cartridge deserves to be preserved.