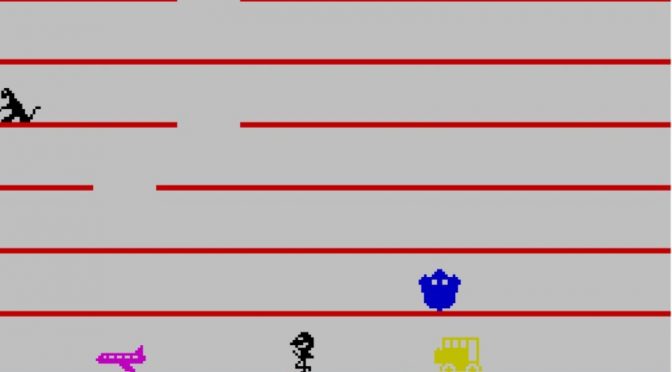 Jumping Jack was released for the Spectrum early in it’s lifetime in 1983, and was one of my earliest experiences of Sinclair gaming in colour. Looking at it now, it would barely pass muster as a free flash based app, given it’s basic graphics and incredibly simple gameplay. But if you consider that the ZX Spectrum was for many people their first colour computer, and that they had previously had to make do with the blocky black and white graphics of the Sinclair ZX81, Jumping Jack was still a revelation.

The premise of Imagine’s game is simple. Jack must reach the top of the screen by jumping through moving holes in the 8 platforms above him. Time the jumps correctly and you pass through the hole onto the next level, time it badly and collide with the platform and you are momentarily stunned. You could also be stunned by falling through one of the holes that move beneath you – fall far enough back to the bottom level and you lose a life. To complicate the challenge further, every jump would create a new random hole somewhere, increasing the potential risk. The holes themselves would travel in both directions, and rise up the levels as they wrapped around the screen, requiring some quick thinking in order to progress. Fortunately Jack could also wrap around each level, giving you an extra escape route when the holes start to close in.

Once you reach the top the level is complete, and you progress to the next which has more holes, and then monsters that inhabit the platforms and must also be avoided, including planes, buses, snakes and strangely what appear to be angry shotgun wielding farmers.

The graphics used could hardly be called cutting edge, with Jack being a crudely drawn but well animated stick man, and the monsters simple coloured sprites. The fast pace however made up for any graphical weaknesses, and resulted in a surprisingly addictive game which took time to master. Magazines at the time lauded the game for it’s playability, despite the basic graphics which hardly compared with other games released in 1983. Remember this was the year that Ultimate released the excellent Jet Pac, and Quickskilva introduced 3D isometric gaming with Ant Attack.  Jumping Jack therefore represents the last of it’s kind, a simple Spectrum game that whilst good, would not cut it amongst the new wave of developers pushing the Sinclair machine to its graphical and gaming limits.

The game was also released on the Atari 800XL and the Dragon 32 as “Leggit”.