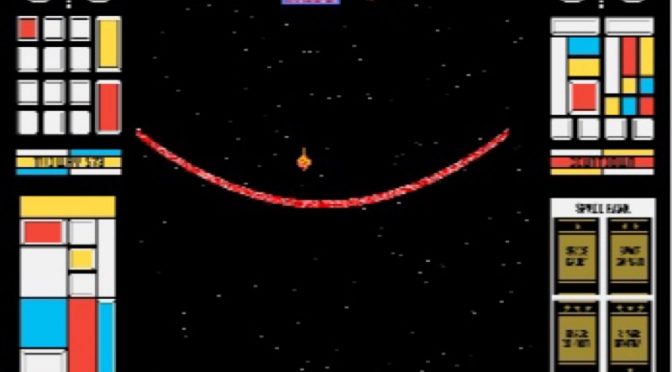 “I’LL GET YOU SPACE CADET!”

My first introduction to this classic arcade shooter was on a school trip in 1981. As we piled out of the coach and into the service station on the M1, I could hear a robotic voice calling from the arcade….

The voice was the alien from the Gorf cabinet, mocking the player to put in another 10p and attempt to defeat the GORF empire.

Like Phoenix before it, GORF game was a shooter made up of 5 distinct levels, some “borrowed” from existing shooters such as Galaxians and Space Invader. In addition to the robotic voice, GORF had other novel features such as the ability to buy up to seven lives depending on how many coins were deposited at the start of the game. Another feature was the ability to cancel your current shot (you only got one at a time) by pressing fire again so you could make the most of the limited number of missiles.

But the stand-out feature for me was the synthetic voice, which mocked the player depending on their rank, as well as a backlit panel beside the screen which showed your current level – more like a pinball machine than a shooter. Not helpful for reuse of the cabinet, which was a priority for early arcade owners, so not repeated elsewhere on other games as far as I am aware.

GORF itself was relatively easy to complete, but quite unfair with some very dodgy collision detection seeing bullets which missed you by a mile destroying your ship.  For this reason I suspect GORF was not as popular as it could have been, as it became a major frustration the more you played the game.

Home conversions were released on Atari and Colecovision consoles, but interestingly they omitted the Galaxians level, most likely for copyright reasons.  GORF was also released for VIC20 and C64.