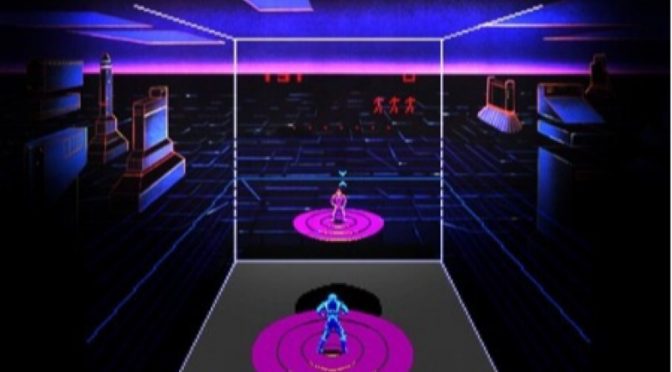 Tron: Made for the Arcade

Most of people of a certain age (35 and over) will remember the Disney film, TRON, and the arcade game that it inevitably would have to spawn, given the film’s game-based storyline. One of the scenes involved a deadly game of Frisbee, where combatants battled to the death with electrically charged discs. The original TRON game had planned to include this section, but Bally decided to launch the game in it’s own right.

As a classic arcade gaming experience, this stands out as one of the first multi-sensory titles, with some cabinets requiring you to stand on a glowing platform, with surround sound and lighting effects linked to the on screen action, and as such drew some big crowds. The game display used a novel mirrored effect that projected the raster graphics onto a glass with hi-res painted graphics behind.

The objective of the game, played in a kind of space-age squash court, is to knock the enemy player (Sark) from the one of his circular platforms by hitting him with your frisbee discs, of which 3 could be in play at a time. You also had to avoid discs thrown by Sark, use the deflect feature, or smash his disc in mid-air with yours. By timing the throws correctly you could knock Sark off before he has a chance to move platforms.

To complicate matters Sark also has green energy balls which he can fire at you, which split into multiples and cannot be deflected but can be destroyed with your discs. There are also special chaser discs which will track you and need multiple hits to destroy.As the levels progress, the number of platforms change, platforms change height or move, and walls appear to block direct shots. You can also shoot each other’s platforms when in raised position, requiring you to visit them in order to keep them.

In stand up cabinet format this game was merely good, but in the surround cabinet it was a real arcade experience. I have not played any of the recent Tron console games, or even seen the long awaited sequel to the original film, but I’d love to get my hands on one of these machines as it just cant be emulated on a PC or even a MAME cabinet.

This review featured in Retro Gamer magazine, written under my Phoenix username.