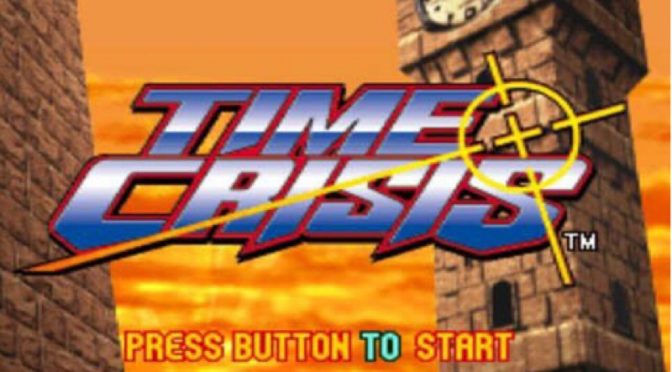 In the same way that Operation Wolf blew away the arcade competition with it’s 2D light gun game in 1987, Time Crisis did the same but in full 3D in 1996. Released after Virtua Cop, the first real 3D light gun game, Time Crisis featured vastly superior graphics, an engaging storyline and a killer feature – the ability to duck behind objects using a foot-pedal attached to the machine.

This is the defining feature of Time Crisis: the game retained the joy of firing a gun rather than moving a joystick, but the play mechanic was moved on from the “shoot before you get shot” to “use duck and cover tactics to shoot at the right time and avoid getting hit”. The enemy AI forces you to take cover in order for them to come out of their hiding places, and as the view is obscured while you are hiding, you come out blind, blasting for all you are worth at the on screen baddies.

Of course the game, due to the control mechanism, was on rails, but this seemed less of an issue when you had some control over the player in each scene. To ratchet up the tension, the time limited nature of each level forced the player to take chances in order to progress, with bonuses awarded in the form of extra time for killing certain enemies. You were also forced to hide in order to reload, rather than shooting off screen as per the light gun game standard.

The storyline was a standard “storm the castle, kill the bad guys at each level, defeat the boss and rescue the girl”, but it was well implemented, with game engine animated cut-scenes to give you a break from the frenetic action. There were also 2 modes, a standard Story mode, and a time attack mode, where every enemy in a level had to be defeated in a strict time limit.

Lucky Playstation owners were treated to an excellent port of the game in 1997, and various arcade sequels followed, with Playstation conversions keeping track. A ground breaking game that can still hold its own if you can find a cabinet.

Dino Crisis for the Playstation 1