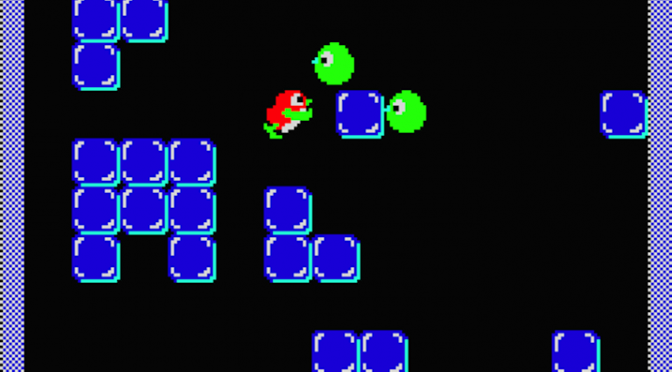 Pengo was an arcade game released by Sega in 1982. Kind of a cross between Pac Man and Space Panic, Pengo was a maze game with a twist. Rather than being constrained by the maze, you could use the blocks of the maze walls to flatten the chasing monsters. Your hero Pengo was pitted against the evil Sno-Bees in this game, strange blobby characters that would wobble around the maze in a hunt for Penguins. 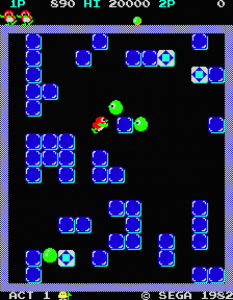 The maze was made of ice blocks which could be pushed by Pengo, squashing any of the chasing Sno-Bees in the process, before smashing against the next ice block. The blocks would slide and collide in a very satisfying way, as you reformed the path of the maze on the fly.  This allowed for a large amount of strategy, as not only could you crush your enemies you could carve new routes through the game maze to avoid being caught.  The Sno-Bees could also destroy blocks by punching them, so you had to move fast to avoid being caught.

Crushing your enemies with ice blocks wasn’t the only way to defeat them however, you could also stun the sno-bees by pushing the outside walls of the maze, which would cause the wall to shake, and run over them whilst stunned. Some ice blocks contained diamonds, and bonuses were earned by lining up all the diamond blocks in a row.

Another similarity with Pac Man was the “between screen” show, which involved dancing penguins instead of ghosts. Early machines featured the popular synth tune “Popcorn”, which really got stuck in your head, but this was removed from later machines due to conflicts with the composer.

The game made it onto some 80’s home computers including the classic Pengi clone for the BBC Micro, which was a reasonably faithful conversion. More recently, well in 1992, I found a cabinet entitled 3 Wonders, a multi-game which included a title called “Don’t Pull”. This was an updated version of Pengo, but with cute bunnies, that played almost identically to the arcade original.

A great game with some very good character animation, I spent a lot of money on this in my teens trying to get through all 16 rounds of the game.