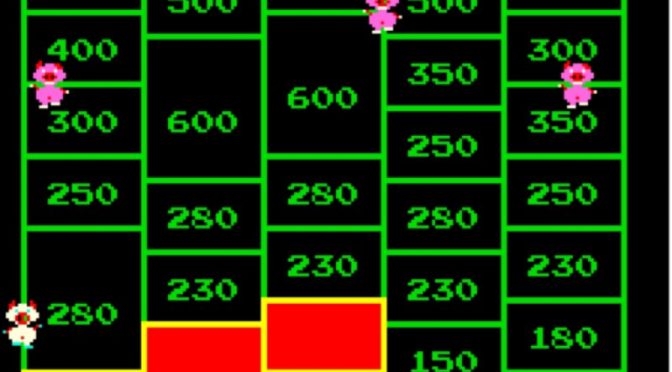 Apart from Amidar, in what other arcade game can you play the part of a paint roller being chased my evil pigs? None other that’s what. Just Amidar.

In 1981 Stern/Konami launched this arcade game onto a public that was recovering from Pac-Man, launched in the previous year, and Amidar featured many similarities. 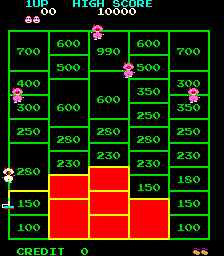 In the first level of Amidar you play the a plucky Gorilla who must collect coconuts dotted around random shaped tiles, whilst avoiding the tribesmen patrolling the maze. Eat all of the coconuts around a tile and the tile is coloured in. Colour in the corner tiles and (pacman style) you become invulnerable for a while. As an added defence mechanism, if you are trapped by a tribesman you can use one of three “jumps” to make him bounce over you.

On the next levels it gets more weird, with you playing a paint roller who must evade murderous porkers whilst colouring in adjacent squares. Try to stray too far from your last coloured square and the paint runs out and you have to go back. This makes these even numbered levels a lot more tricky, with careful planning required to complete the stage.

If that is not weird enough for you, in between levels there is a bonus stage which requires you to send a pig down one of a number of pathways, a bit like those kids puzzles in pizza restaurants, in order to pick up the bonus bananas and 5000 points. Why bananas? Surely this would be a bonus for a Gorilla, not a pig?

On both levels the enemy behaviour is pretty predictable, with no “homing” in on the player, except for one character who will start to chase you after a certain time period has passed. On later levels the number of enemies increases, and the time taken for the enemy to home in on you reduces, as well as the grids becoming more complex to navigate.

As well as the classic arcade version, there were home ports for the Atari 2600, and various conversions under a variety of names for the home consoles, my favourite being Crazy Tracer for the BBC Micro – Acornsoft also did versions of Pac Man, Mr Do, Galaxians, and were quite good at this.

Amidar feels like a classic, it has everything an old school arcade game should have: black background, lives and scores at the top, credits at the bottom, catchy tune and simple but colourful graphics and addictive, score chasing gameplay. Not a game that everyone raves about but in my opionion they should.