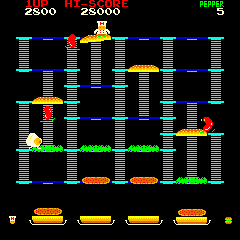 Burger Time was launched by Data East in 1982 to an arcade public previously starved of fast-food based gaming action.

Long before Gordon Ramsey and other so-called “celebrity” chefs, the hero of this game was burger tosser Peter Pepper. Transported to a massive kitchen with various levels, he has to climb ladders and cross platforms to assemble huge burgers, whilst being chased by angry foodstuffs. The burger components of bun, beef & lettuce must be walked across (very unhygienic) in order to make them fall to the plate at the bottom of the screen.  The falling food item knocks each item below it down one level, meaning that the most effective method of creating your burger is to start at the top and work down.

Complicating matters are the evil ingredients Mr Hot Dog, Mr Pickle and Mr Egg, all of whom are out to stop you, possibly in some attempt to get themselves on the menu instead.

Fortunately you can stop the various menu items by trapping them between the burger components, or by spraying them with a limited supply of pepper (perhaps the inspiration for pepper spray) in order to stun them for a few moments.  If you time your spray well you can take out more than one enemy at a time with a single spray, enabling you to walk straight through them whilst they writhe in agony.  Not quite such how pepper hurts a sausage that has no eyes, but then Burger Time is a game about walking sausages..

As well as your burger components and enemy food items, there are also bonuses such as ice creams and french fries which appear pac-man style for extra points when collected.

Assemble all the burgers and the level is complete, and you move to the next, with slightly angrier sausages, and platforms which provide access to bigger burgers including slices of cheese and tomato. There are 6 levels in total before you loop around to the first again with an increased difficulty level.

Burger Time was released on a number of home platforms, including a classic for the Colecovision console, which was host to a number of great arcade game conversions including Donkey Kong and Zaxxon.  The game was also released on the Nintendo Entertainment System and Atari 2600, as well as a later release on Nintendo’s Gameboy.

In 2011 a remake of the game was released as a downloadable title across all the major consoles, titled “Burger Time World Tour” – a comprehensive revision in full 3D which sticks to the original burger building recipe (sorry).

My personal favourite was a conversion by Ocean for the ZX Spectrum known as Mr Wimpy, in honour of the mascot of Wimpy burger restaurants in the UK. Birmingham residents will also note the connection with late night fast food restaurant “Mr Egg”, which presumably was named in honour of this great game.