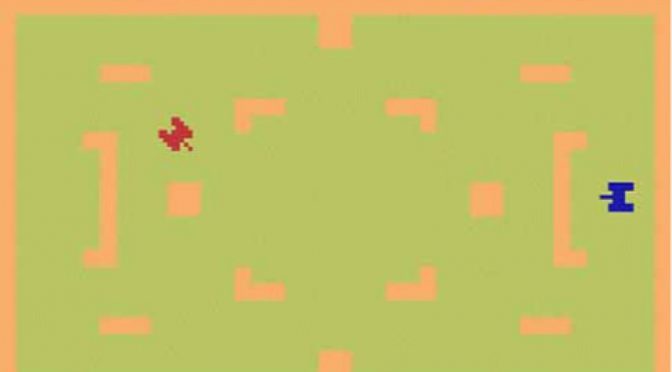 For many of us Atari’s Combat was the first introduction to a cartridge-based console game, and for that reason has a special place in many people’s retro memories.

As one of the launch titles for the Atari 2600 (VCS), Combat was included with every console sold (a bit like Wii Sports now), and as such had a massive exposure amongst the Atari fan-base.

As a classic 2 player game it introduce the concept of the party game – lots of different mini-games that could be played out between 2 human opponents.

Atari fans are aware of the limitations of the 2600 kit, which was built around the concept of “pong”. The system is happiest when there are 2 independently controlled players or “bats”, 2 “missiles” and a “ball” which can interact between them, as well as scenery the missiles or ball can bounce off. Combat took this concept and used tanks (or planes) for bats and the missiles, with scenary you can hide behind, and hey presto a classic is born.

This is a great example of cat and mouse style game, with a simple risk reward mechanism. You could move your tank around the maze to get a clear line of sight on your opponent, or wait for your opponent to move and try and get the first shot in. Such a simple concept, but the same basic premise as the multi player FPS games of today.

Add to this the standard Atari 2600 twist of including more than one variation of the game (27 in fact) in the cartridge, and the longevity is extended hugely. Admittedly the games are not that different, but in addition to the Tank battle there was also an Aerial dogfight, and a number of variations on the use of guided missiles and invisible tanks or planes. The dogfight was actually quite strategic in that the planes flew at a constant speed and you could only manage direction and firing, requiring you to pilot them skillfully in order to get behind the other player to shoot them down. Cue long sweeping chases, waiting for the other player to twitch or make a mistake.

I have very fond memories of this game, which I only got to play at a friends house when I was a kid, and have recently introduced my son to after he played something similar on the Wii (The Wii Play title has a similar mini-game called Tank Battle).

A great excuse to dust off the Atari 2600 Woody again.