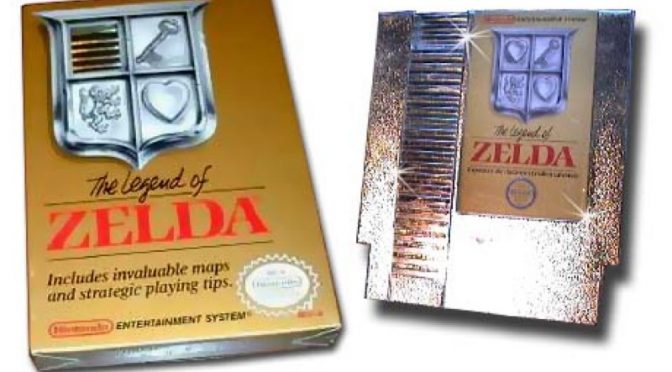 In this series of blogs I’m highlighting the best of physical game media of all time – the next generation of games could be download only, so enjoy these fantastic objects while you can, they won’t be making any more of them.

The Nintendo Entertainment System (NES) had the biggest of all the physical video game cartridges, with simple cardboard boxes to hold them. Almost all of the cartridges were a standard battleship grey, with games being differentiated by the sticker with the game title and artwork. There was one game however that bucked the trend, and it did so in style, with a solid gold cartridge – or at least that’s what it looked like.

The Zelda series requires little introduction, but only gamers of a certain age will recall the excitement generated by the release of the original game in the series, the Legend of Zelda for the NES. The game came packaged in a gold box, with a cutout to reveal the gold cartridge beneath, immediately making the game stand out as something special. Inside the box the game featured an world map, something that many gamers at the time would had welcomed, as it negated the need to draw your own as you went through the game.

The game itself was a revelation, very much doing justice to the ostentatious packaging, not an exercise of style over substance. Subsequent Zelda games on later consoles often featured the Gold cartridge, but it was the NES version that was the original and best.