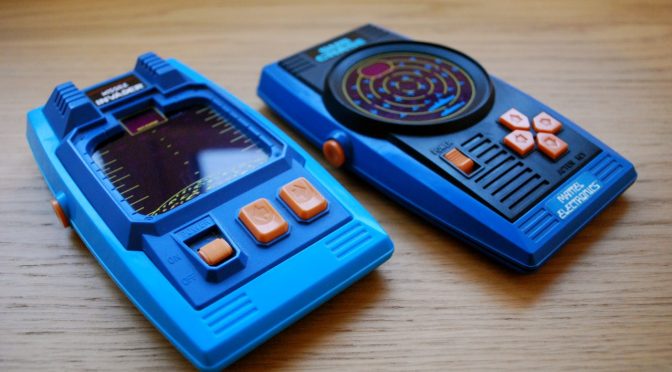 By necessity the Mattel handhelds had to augment the game displays to put the simple glowing LEDs in context, helping players understand what they were seeing on screen. This meant that the handhelds themselves were styled in the theme of the game, to give the player a clue as to what they were supposed to be doing.

In the case of Mattel’s Missile Invader, the console showed a view screen with a planet surface and layers which lined up with the less that represented the invading alien forces.  For Sub Chase, the screen was round and modelled on a submarine periscope, with the less representing enemy ships. Both games featured classic 2 digit, 7 piece LED numerals for the score – always allowing the player to score a maximum of 99.

The design of these Mattel handhelds is purposefully over the top relative to the simple LED displays, which only serves to enhance the game rather than distract the player – like early space invaders games with shaded screens, the console itself was part of the game, rather than a means of just presenting and controlling the action.  When each unit only had a single game mode and a single purpose, the design had to be memorable, compered to the bland and functional designs of multi-game handhold consoles today.

This photo is one of a series I am taking of my collection to make sure I have a decent store of images to accompany my retro game blog updates and reviews.   Rather than using a camera phone I have resorted to my Nikon D60 digital SLR for the maximum quality and impact.