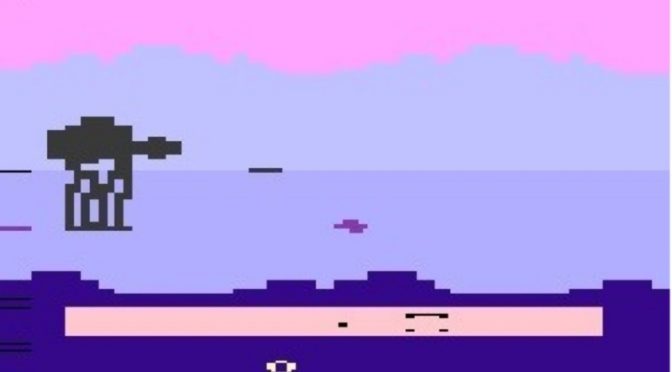 The Empire Strikes Back is regularly quoted by fans as their favourite Star Wars film, focused on Luke’s development as a Jedi knight, and his relationship with his evil nemesis Darth Vader.

The stand-out action scene in the film is the battle on the ice planet Hoth, where the Imperial forces locate and launch an attack on the rebel base with ground troops and the iconic AT-AT Walkers. These huge lumbering machines resemble giant camels, carrying troops and spitting lasers, and in the film’s equivalent of the Death Star trench run, have to be slowed down by the rebel forces to allow the evacuation of the base.

This scene forms the premise for Parker Brothers 1982 game, released on the Atari 2600, where you as a rebel pilot take on the mighty walkers, in a game resembling the classic Defender by Williams. Piloting a rebel Snowspeeder, you can fly horizontally across the landscape to locate and attack 5 imperial walkers, which are moving from the left to the left towards your base. The location of the walkers is shown on a map (Defender again) at the bottom of the screen. In the film the only way to bring the walkers down was using a slingshot to wrap around the huge legs to trip them over, but on the Atari 2600 you have to shoot down the walker with repeated hits of your laser. Multiple hits to the body were required, slowly turning the colour of the walker from black to red and orange, before finally destroying them. You could also aim for a weak spot indicated by a flashing blob.

The walkers themselves were not without their own weapons, requiring you to dodge lasers while you zipped around the walkers, and whilst at first they were “hollow” allowing you to fly through them, on later levels they were solid, increasing the difficulty level. Your ship had 3 lives, indicated by the colour of the snowspeeder, but could be repaired by landing at the bottom of the screen, but this consumed valuable time. On later levels the AT-ATs would also fire smart bombs, and march more quickly towards your base.

The level is complete when you have destroyed all 5 walkers, or the walkers reach your base and the game is over.

So the big question is, was Parker Brother’s Empire Strikes Back any good? I certainly remember playing it as a teenager and spending hours perfecting my technique, and on replaying the game today it feels just as good as it was in 1982. Given the gaming potential of the original Star Wars film, it is an interesting fact that this was the first ever computer game from the iconic series. It certainly captures the essence of the film, and the battle scene that we all wanted to be in, playing hero Luke Skywalker. At the time my only regret was that you couldn’t use a tow cable to trip the AT-ATs.

Since the release of this game there have been Star Wars games released for every home computer and console from the NES to the XBOX 360, including recreations of the Hoth battle scene. The best of these was part of the Rogue Squadron series of games starting with the Nintendo 64, and later the Gamecube. In these later releases you finally had the ability to take down the AT-ATs with a tow cable, just like in the original film, and it was worth the 15 years I had to wait for this to happen.

There have been some great Star Wars games over the years, as well as some spectacularly poor releases, but this first game falls into the former category, and a great gaming memory for any Star Wars fan around in the early 80’s.

5 thoughts on “The Empire Strikes Back for the Atari 2600”