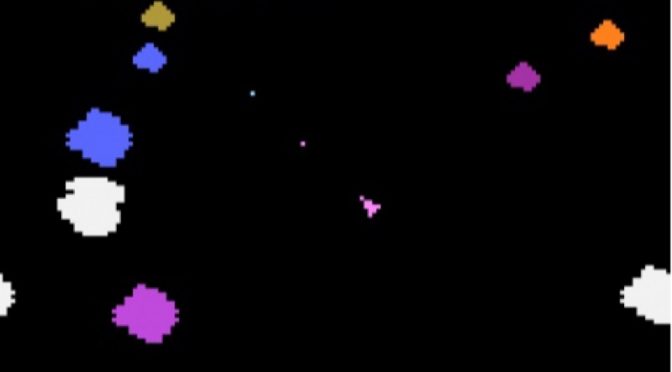 Atari released Asteroids in the arcades in 1979 and it became their biggest selling game of all time, up there with Space Invaders as one of the most recognised video games in history.

It was only natural that Atari’s #1 property was ported to their new home system, the 2600. Featuring solid raster graphics rather than crisp vectors, the game somehow retained the spirit of the original if not the look. This feeling was enhanced by the sound, which retained the menacing 2 notes which, Jaws-like, sped up as the pace of the game increased.

The arcade game felt like you were stranded in a cold and empty space, but the Atari 2600 version, with its bright colours was altogether more jolly. 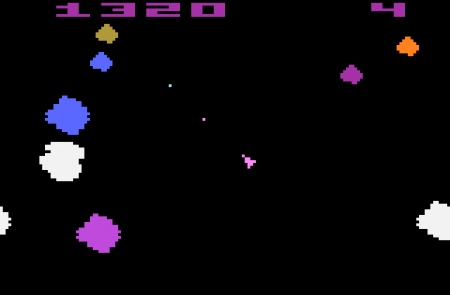 To add a bit of longevity (if this were needed, when all you had to have was a strong forearm and a love of button mashing) there were 66 variations of the game, including various combinations of warps and shields and enemy ships.

Difficult to find the words to describe such a seminal game on a ground breaking platform, so how about some facts I found on the internet so they must be true:

* In 1999 a homebrew version was brought out with wire-frame “vector” graphics, basically the asteroids were the same but hollow

* Asteroids was released on every Atari home system and computer except the 5200, which only made it to prototype stage

Still playable today, a great gaming memory from my early teens, and the first game I bought when I got hold of an old 2600 on ebay last year.