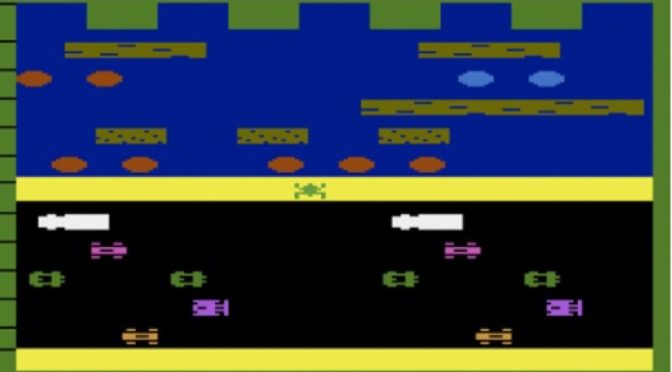 Frogger is one of those classic video games, up there with space invaders and pac-man having broken out of the arcade entered popular culture. The premise is simple – get your frog across the busy road, over the crocodile infested river, and home to his lily pad. The gamaplay was all about timing, when to cross the road, when to jump on a fast flowing log, and when to jump from a submerging turtle.

It’s no suprise then that this classic game from Konami has been replicated on any number of platforms from the Spectrum through to the Playstation (I’m particularly fond of Hopper on the BBC Micro, back when they could get away with straight rip offs of other peoples intellectual property).

The Atari 2600 version of Frogger was the first opportunity that most people had to play the arcade game at home, being released a year after the arcade game in 1982, and for a change the experience was a good one (Pac-Man on the 2600 anyone?).

Everything was there, from the multiple lanes of traffic to the fast moving logs, providing an authentic challenge to your seemingly suidcidal frog as he tries to make his way home. You could even jump on the back of a crocodile, as long as you avoid the snapping jaws. Take too long and your frog dies, adding an extra element of challenge to the game. Fill all 5 “home” slots on the far side of the screen and the game cycle starts again.

The graphics featured in this version of Frogger may have been a bit rudimentary, and there was a certain amount of flicker on the screen, particularly when the frog jumps across a lane of traffic or onto a log, which is most of the time, but this can be forgiven.  For anyone who knows anything about programming for the Atari 2600, getting the game to run at all was a significant achievement.

A simple game but very addictive, Frogger is a must for any Atari 2600 collection.