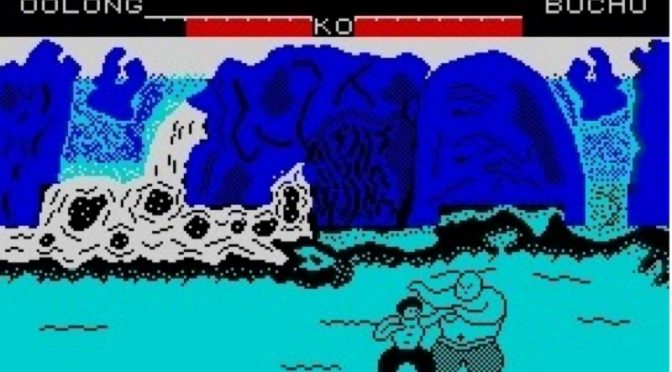 Yie Ar Kung Fu started life as an arcade game released by Konami in 1985, having features that were seen for the first time in a fighting game, including multiple opponents, a health bar and multiple special moves. This really was the birth of a genre which has spawned 100’s of one on one fighters, including series such as Street Fighter, Tekken and Soul Caliber.

The Yie Ar Kung Fu game on the Spectrum was a faithful rendition of the original game, and featured a martial arts master, Oolong, whose mission was to fight through a series of bouts against increasingly difficult competitors. Moves were achieved through the joystick and a punch and kick buttons, and included jumping attacks. With practise you could pull off moves such as leg sweeps and roundhouses, which were needed to defeat each of your opponents different fighting styles. Whilst not the first game to feature hand to hand combat, earlier games such as Kung Fu Master had a very limited move set, with basic punch and kick moves. The Spectrum version of Yie Ar Kung Fu managed to replicate all 16 special moves from the original arcade game, providing a great variety in the approach to defeating each opponent. This did however mean that playing on the keyboard required use of 9 different keys, and so a joystick really was the preferred option.
This video is the enhanced 128k version with fancy fonts and improved music and effects

The winner is the first to 10 points (or hits) in a single bout, each hit reducing the opponents life bar, a feature that carried across to pretty much every fighting game that followed. Each of your 10 different opponents had unique moves and attacks, some armed with weapons such as swords, nunchaku, chains and throwing stars. A different strategy was required for each, dodging attacks and timing your strikes at a moment of weakness.

The graphics of the Spectrum version of Yie Ar Kung Fu were detailed, if a little less colourful than on other conversions, mainly due to the Spectrum’s attribute clash issues. But this didn’t stop it from being a great game, and remembered fondly by many Spectrum owners.

Along with “Way of the Exploding Fist”, this game represents the height of fighters on the Spectrum (a machine not ideally suited to the genre) and is memorable for being my first experience of a proper fighting game.

4 thoughts on “Yie Ar Kung Fu for the ZX Spectrum”